Two New Zealand fairy tern eggs have gone missing from the Mangawhai Wildlife Refuge (Northland) overnight causing DOC wardens to look into different scenarios as to what has caused the disappearance.

Two New Zealand fairy tern eggs have gone missing from the Mangawhai Wildlife Refuge (Northland) overnight causing Department of Conservation wardens to look into different scenarios as to what has caused the disappearance. 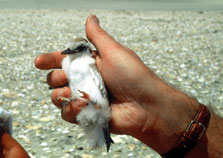 High on the list is the possibility of the eggs being taken. Human footprints were found leading to the shell area that the birds were nesting in. Nesting sites are fenced and have extensive signage and the footprints could not be accounted for by the onsite warden.

The nest contained two eggs, one live and one 'dummy' egg (an infertile egg filled with wax) which was being used as part of our nest management. For the 'dummy' egg to have completely disappeared indicates that the loss was unlikely to have been caused by a predator. Extensive trapping and monitoring of this site also has not indicated the presence of any predators likely to have taken these eggs.

DOC staff would like to hear from anyone who may have information or saw anyone acting suspiciously in the Wildlife Refuge between 12 noon Sunday 20 December and 12 noon Monday 21 December. While video equipment is already being used on site this will be increased over the summer holiday period.