New Zealand has several kinds of native wasps which have evolved here and have never become a nuisance.

But five social species of wasps have been accidentally introduced since the 1940s and are classed as pests (German and common wasps, and three species of paper wasp). How to identify wasps.

Introduced wasps are a significant pest which harm our native birds and insects, and are a threat to human health and recreation.

The approach to wasp control depends on whether wasps are a nuisance over larger areas of land with several nests or you have one or two wasp nests in an urban area.

Vespex is a protein (meat-based) bait, containing the insecticide fipronil, which is deployed from a bait station. Wasps take the bait back to their nests to feed their young, wiping out the nest. This bait is targeted at wasps and is not attractive to bees, but it is only effective at certain times of the year when wasps are eating protein.

Vespex was developed in conjunction with DOC, although we do not supply it. It is available from Nelson-based company Merchento, and users must pass an online test to ensure they use it according to the instructions. It can be used on your private land or on public conservation land.

To find and destroy a single wasp nest

If you search on sunny days, near dawn or dusk, the low light angles will highlight the flight path as wasps enter and leave the nest.

Place a dessert spoonful of insecticide at the nest entrance after dark when the wasps have stopped flying. You can use a puffer bottle for this job.

Worker wasps flying in and out will spread the powder into the nest and the colony usually dies within a day. If activity continues repeat the treatment until wasp activity ceases.

Don't shine your torch into the nest or wasps will fly up the beam.

Hardware and garden stores supply a range of insecticides suitable for this method. These include Wasp Killer Dust and Permex Insect Dust, which have permethrin as the active ingredient, and Rentokil Wasp Killer.

New Zealand has some of the highest densities of German and common wasps in the world. This is because they have no natural predators here, our winters are mild and there is plenty of food for them.

Introduced German and common social wasps are very similar in appearance, and both have the characteristic black and yellow colouration.

Social wasps live as colonies in nests of honeycomb-like cells. They form complex social groups and all members of a colony help raise the young.

The German wasp was introduced in the 1940s and the common wasp arrived in the late 1970s but is now widespread. Both species live in large colonies, about the size of a soccer ball. These colonies can become huge if they manage to survive over winter.

German wasp nests are grey. Common wasp nests are brown. The world's largest recorded wasp nest was discovered at Waimauku (near Auckland). It was 3.75 metres tall and 1.7 metres wide. 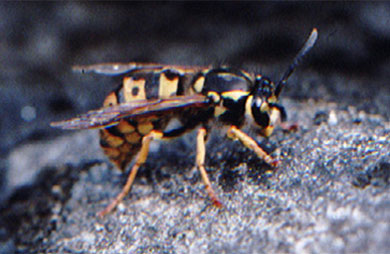 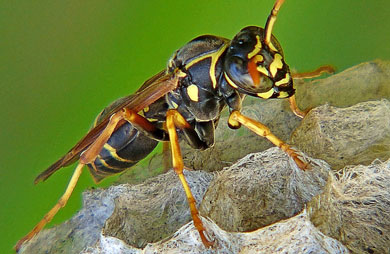 Although not as much of a problem as German and common wasps, paper wasps have also been introduced to New Zealand.

The Asian paper wasp has been found in the North Island and top of the South Island.

The Australian paper wasp remains confined to the north of the North Island.

Both paper wasps build small nests out of regurgitated woody material, about the size of a pear.

Wasps are a nuisance to forestry gangs, and a worry to tourist operators. They are unwelcome guests at summer picnics and barbecues. No-one finds a wasp sting a fun experience.

The venom from a wasp sting contains several toxins that can cause a hypersensitive or allergic reaction in some people.

Wasps are a major problem in some beech forests where they consume massive amounts of honeydew. Honeydew is produced by a native scale insect and is an important food for native birds, bats, insects and lizards.

Wasps also eat huge numbers of native insects and have even been seen killing newly hatched birds. By eating so much, they upset the natural food chain of the forest.

Seasonally in some beech forests there are an estimated 12 nests, or 10,000 worker wasps, per hectare. This makes the total combined body-weight of wasps in these areas higher than the weight of all native birds, stoats and rodents, put together.

An evaluation of the costs of pest wasps in New Zealand study assessed the economic impact of German wasps and common wasps across industries, society and the natural environment in New Zealand.

We work with Stuff and community organisations on the Wasp Wipeout project to increase wasp control and reduce their numbers in some areas worst affected by wasps.