The name galaxiid comes from the patterns on the skin of adult fish that look like a galaxy of stars. Our galaxiids are generally nocturnal and very good at hiding. They find shelter and food in bushy streams. New Zealand also has a number of non-migratory galaxiids.

Although galaxiid species are found in many places in the Southern Hemisphere, the banded, giant, and shortjaw kōkopu only exist in New Zealand.

Inanga are found in a wide variety of habitats, from tiny creeks, to coastal rivers, lowland streams, lakes and wetlands. They are the only migratory galaxiid species where the adults swim in shoals.

Inanga are small and short-lived, with most only surviving for 1 year and reaching around 100 mm in length – although the longest on record is 190 mm.

Because they are poor climbers, inanga are usually found near the coast. Their silvery belly and somewhat forked tail make them easy to distinguish. Found in places as far flung as Chile, Australia and Argentina, inanga are the most widely distributed native freshwater fish in the world. They are New Zealand’s most commonly caught species.

Find out more about inanga. 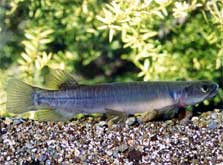 Banded kōkopu have pale vertical stripes across their sides. Also called Māori or native trout, they dwell in pools with overhanging banks, logs and boulders.

Like other galaxiids, banded kōkopu have sensors on their heads to detect when and where something hits the water, enabling them to feed on insects that fall from overhanging plants.

They are good climbers and can be found up to 550 m above sea level. Most grow to around 200 mm long, but they can reach 260 mm. Banded kōkopu need stream-side plants to survive. 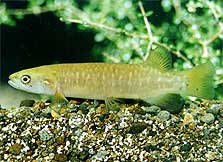 Giant kōkopu are the largest of all the galaxiids, not only in New Zealand, but around the world. Although individuals are usually 300–400 mm long, one specimen has been found weighing 2.8 kg and measuring 580 mm long.

Not the most adept of climbers, giant kōkopu are generally found close to the sea. They inhabit wetlands, lakes and forest streams, and rely on good bush surrounds. Giant kōkopu are skulking predators, lurking under cover and making speedy dashes to nab their prey.

They are slow-growing and can live for more than 20 years. Like the banded kōkopu, giant kōkopu are also called native or Māori trout.

Kōaro are accomplished climbers, being able to negotiate near-vertical waterfalls using specially formed broad fins that have a grippy texture underneath.

These solitary fish are often found in fast-flowing, cool, tussock or forest streams. They commonly grow to about 160–180 mm, but can reach 290 mm. In bright light, their skin shines with iridescence.

Shortjaw kōkopu are rare, secretive and seldom seen. They usually grow to 150–200 mm but can reach 370 mm. As their name suggests, they have a shorter lower jaw. This is probably a feeding adaptation that allows them to scrape insects off rocks in a stream.

These fish are only found in New Zealand. They live in rocky forest streams at low to moderate altitudes. Many streams like this have been degraded and the habitat around them has been lost. These changes have contributed to the rarity and threatened status of shortjaw kōkopu.

Find out more about shortjaw kōkopu

Find out when and where to fish for whitebait in New Zealand and the Chatham Islands.

This sustainable fishery project aims to enhance whitebait habitats on the West Coast.