Inanga - the most common whitebait

Inanga are the most common and smallest of the whitebait species.

Inanga (Galaxias maculatus) are the most common native fish species caught as whitebait. The other species that make up the whitebait catch are banded kokopu, giant kokopu, kōaro and shortjaw kokopu. These species are all migratory galaxiids.

Inanga have an unusual lifecycle. They begin life as eggs laid in vegetation beside streams in late summer and autumn. When the eggs hatch, they are carried downstream as larvae and spend the next six months at sea. In the spring they migrate upstream as whitebait and grow into adult fish. 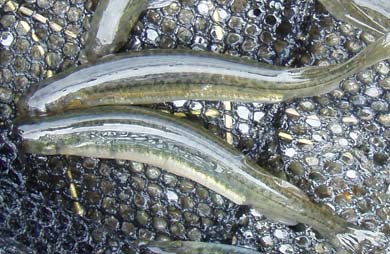 You can pick out inanga from the mix of whitebait in a catch by their tiny, black mouths. They also have spots along their bodies and in front of the dorsal fin on their backs. Inanga have slim bodies and are often longer than other species in whitebait.

Adult inanga are the smallest migratory galaxiid and grow to 11 cm in length, while giant kōkopu can reach 50 cm. They also have distinctive silvery bellies, speckled olive-coloured backs and no scales. Although they look similar, you can tell them apart from common smelt because common smelt smell like cucumbers.

Where do inanga live?

Inanga live in lowland freshwater habitats like coastal creeks and streams, rivers, lagoons, lakes, estuaries and wetlands. Unlike other migratory galaxiids, they don’t travel long distances inland as they have difficulty swimming through swift-flowing rapids and cannot climb past waterfalls.

Adult inanga often swim in shoals and can be seen roving around during the daytime feeding on tiny insects. The adults of other migratory galaxiids tend to live a more solitary and nocturnal life.

Although inanga are native to New Zealand and some of its offshore islands, they are also found in other Southern Hemisphere countries including Australia, Chile, Argentina and the Falklands Islands.

Eggs are laid on land

A few days before a full and new moon from February to May, inanga migrate downstream to the place where fresh water meets sea water coming upstream. They congregate here, waiting for a very high, spring tide.

As the tide rises, shoals of inanga work their way along the bank, pushing into the flooded vegetation at the very edge of the water. They choose the base of tall, dense vegetation to lay their eggs. Each female can release up to 13,000 eggs, which are 1.2 mm in diameter.

After the tide goes down, the eggs are stranded until the next spring tide. Streamside plants protect them from dehydration, extremes of temperature and damaging UV radiation, but natural predators like herons and eels seek them out for food. The eggs can also be damaged by bacterial and fungal infections, drought and flood.

Larvae move to the sea

Eggs develop for 2–4 weeks, depending on the temperature. When the water from the next spring tide reaches the fully developed eggs, they are stimulated to hatch and are carried downstream to the sea. The tiny larvae grow quickly, feeding on plankton in coastal waters for 6 months.

By spring the juvenile fish have grown to about 55 mm in length and start to migrate into rivers and streams. During this migration they are called whitebait. Those that escape the whitebaiters’ nets spend the summer in backwaters and slow-flowing sections of rivers and streams, growing into adult fish.

Life as an adult

Inanga feed on tiny insects in the open water. They grow to 8–11 cm in length and have a bright silver abdomen and a speckled olive-coloured back. Inanga have no scales and look transparent.

By late summer most inanga are mature and ready to spawn. Many fish die after spawning but some live for another year. Spawning takes so much energy that the fish are left in poor condition and are at greater risk from disease and predators. How to find and protect the places where inanga are spawning already, and make new places that are suitable for spawning.

Inanga spawn where saltwater meets freshwater in estuaries. Straw bales placed along the edge of a stream or river can show where these places are and be useful as temporary spawning habitat.