Dramatic views over the South Coast

Located in Fiordland National Park in the Fiordland region

There are many activities you can enjoy in the Waitutu/South Coast area, including walking, tramping, boating, fishing, historic sites, guided activities, hunting, kayaking and more.

Sweeping coastal forest scenery - whether you are high up on the Hump Ridge, or walking along the coast, you will be treated to fantastic coastal and forest scenery in this area.

Wild, remote, adventure seeking - there is plenty of very exciting (and remote) backcountry beyond the Hump Ridge and first part of the South Coast Track for experienced trampers, hunters and recreational fishers.

Excellent boating on Lake Hauroko - you will find excellent boating, fishing and kayaking opportunities on Lake Hauroko, New Zealand’s deepest lake (462 m), whose lakebed reaches well below sea level. To Māori, Hauroko means “the soughing of the wind”, as the wind can create huge waves on the lake in a matter of minutes, funnelled by the steep surrounding hills. The lake is drained by the steepest river in New Zealand – the Wairaurahiri River.

Rich history - visit the Port Craig School Hut heritage site for a glimpse into the rich Māori and early timber milling history of the area. Look around at the old wharf remains, walk on an historic viaduct (large wooden bridge over a gully) , or take a self guided nature walk.

Find things to do and places to stay Tuatapere area

The Hump Ridge consists of sandstones, mudstones and conglomerates of Tertiary age. These sedimentary rocks have been weathered at the southern end to produce a striking series of rock towers standing above tussock, herbfield and alpine tarns.

Waitutu - a forest sweeping to the sea

Dense, hardy podocarp forests cover these landscapes all the way to the sea.

The podocarp species (named after the ‘footed’ seeds) are mainly rimu with lesser amounts of miro, Hall's tōtara and rātā.

On the easier terraces, silver beech and kamahi join in.

Higher up, the terraces are poorly drained, so stunted bog forest reigns with its common yellow-silver pine.

Birds and other wildlife in the forest and sea

If you are lucky you might hear the rarer mohua/ yellowheads or New Zealandrobins in the forest.

Around the coast, you can sometimes see Hector's dolphins (look for the ‘mickey mouse’ shaped dorsal fin), New Zealand fur seals, little blue penguins, and if you are very lucky, occasionally Fiordland crested penguins or passing whales. Rock pools exposed on the reef at low tide teem with life.

Red deer, pigs, and possums are present in moderate numbers.

The Waitutu/South Coast area was visited by early Māori in search of food from the sea, rivers and forests.

Kaika or hunting camps were sited on the banks of the Waiau River, near Tuatapere, and the river crossed by mokihi or rafts.

Tracks led along the terraces and beaches providing access to Sandhill Point, the Wairaurahiri River and beyond. These were probably very close to the South Coast Track of today.

Lake Hauroko is of special significance to Ngāi Tahu Māori, who consider it tapu (sacred), as it is associated with the urupā (burial grounds) of their tupuna (ancestors). 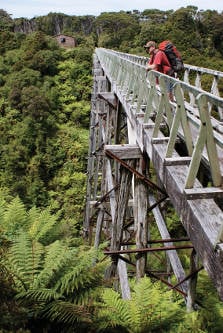 Percy Burn, one of the grand viaducts built for moving timber

The South Coast Track paved the way to gold and timber

Much later, in 1896, the coastal track was formed by government workers to provide access to gold mining settlements at Preservation Inlet, including Cromarty and Te Oneroa.

In 1908 a telephone line was installed along the track linking the Puysegur Point lighthouse with Orepuki. Insulators, wire and old maintenance workers' huts can still be found today.

During the 1920s Port Craig was the site of the largest and most modern sawmill in New Zealand. Relics remain at the site, and you can stay at Port Craig School (now a DOC hut), and take the interesting 20 minute self guided walk.

The Marlborough Timber Company mill employed over 150 men and produced up to 1800 cubic metres of timber a month. Logs were brought to the mill along a high class tramway from the terrace forests to the west, between Port Craig and the Wairaurahiri River. By the time milling ceased in 1932, about 1400 hectares of forest had been logged, the timber being shipped directly from Port Craig.

Four large wooden viaducts were built to carry the tramlines over ravines. The largest, the Percy Burn viaduct, is 125 metres long and 36 metres above the creek bed. It was fully repaired in 1994. The South Coast Track now crosses these viaducts, thanks to the extensive restoration work of the Port Craig Viaducts Trust.

Waitutu Forest, Lake Hauroko and the South Coast areas are in southern Fiordland, Southland. The nearest small town with facilities is Tuatapere.

To get to Lake Hauroko from Tuatapere:
Head north towards Clifden (12km, 10 minutes), and turn west along the Lillburn Valley Road to Lake Hauroko (about 36km to the carpark, 20km of which is unsealed road).

To get to the Hump Ridge and South Coast tracks from Tuatapere:
These tracks start and end at the Rarakau carpark.

Go south on Papatotara Road and drive about 28km following signs to Bluecliffs Beach and the Rarakau carpark. 7km of this road is unsealed.

The carpark is signposted in front of the Rarakau Station homestead, 150 m past the track entrance (cars are left at the owner's risk).

Approved commercial operators are able to provide access to this region by helicopter, float plane and jet-boat.

Prepare for your trip to Fiordland.