A guide to the native bird life in Arthur's Pass National Park.

Find out what birds to see and where to look. 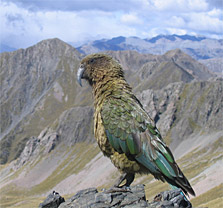 Kea are regularly seen within Arthur’s Pass village, often at dusk. Do not feed them as human food can make them unwell and encourage pest behaviour.

Scotts Track to Avalanche Peak is a prime site for finding kea in their natural environment, especially around the tree-line. Young kea, identified by a yellow ring around eyes and nostrils, often gather at the viaduct lookout (Deaths Corner).

Smaller than paradise shelducks and blue/grey in colour with a reddish-brown chest – there are few locations close to the village to view these rare ducks.

You could try Otira Gorge just below Windy Point, or the Otira Valley Track just above the footbridge. Locations further afield include the Edwards River near the East Edwards junction, or in the Mingha valley just above Mingha Biv.

Please report any sightings to the Department of Conservation.

Often heard around Arthur’s Pass Village, but rarely seen, there may be up to 40 birds living in the Bealey valley. (This is more than the number of people who permanently live here!) 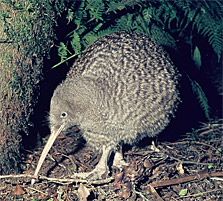 The male birds call year-round with a very loud high- pitched whistle. The females call in spring and summer with a loud warbling whistle.

The best time to listen is the first two hours after dark. If you are lucky enough to see a bird do not pursue or interfere with it, and do not take flash photographs.

Rock wrens are usually in pairs.

Temple Basin Track - where it turns from a 4WD track into a walking trail, the head of the Bealey valley, around the tree-line on Scotts Track, or near the footbridge in the Otira valley, are all good places to spot these birds. 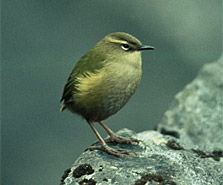 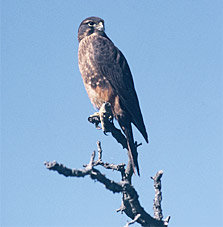 Falcons are found throughout the park - try School Terrace, near the police station (Rough Creek), or the chapel. Alternatively, they are often seen on Cons Track Route to Mt Cassidy or on the Avalanche Peak-Mt Lyall ridge.

These are the only birds in the world with a bent beak specifically evolved for hunting insects under braided-river rocks. Wrybills nest only on braided rivers between October and early January. They can be found on the Waimakariri River flats below Bealey Bridge on SH 73. 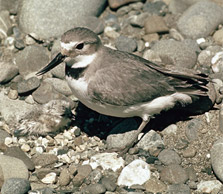 Do not approach, or disturb them as they may abandon their nests.

Several of these small owls live around the village. Try the area of the forest around Rough Creek Road, Cleland Place, or Brake Hill Road. Morepork are nocturnal and generally only seen after dark. They are more likely to be heard than seen with their distinctive muffled ‘more-pork’ call.

These are not usually found in the village unless they are migrating through. The place you’re most likely to see these birds is in the forest beside the Taramakau River, or at Kellys Creek.

Look around the perimeters of Lake Pearson/ Moana Rua or Lake Grasmere. One or two birds are often seen feeding in the waters next to the picnic/camping area on the foreshore. 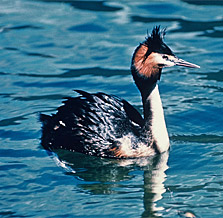 Do not approach these birds, especially if they are near the shore as they are easily frightened from their nests.

There have been occasional sightings at the forest edge beside the Waimakariri River above Turkey Flat. They also inhabit forests in the Taramakau valley above Locke Stream Hut, through to Harpers Pass, and in the Hawdon and Poulter valleys.

Not to be confused with the kea, kākā are brown with a pale head and red underwings and generally more aloof than kea. 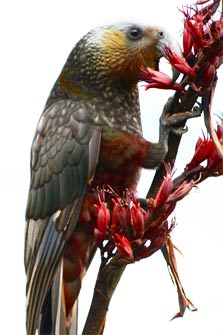 This endangered bird, often called the ‘bush canary’ because of its canary-like song, is now only seen in the Hawdon Valley. Try the forks between the main Hawdon and the East Branch Hawdon junction. Be careful not to confuse these birds with the common introduced yellowhammer found in open country rather than the forest and bush inhabited by yellowheads.

This species with its distinctive ‘kikikiki’ call, is generally found within the forest canopy feeding on seeds, buds, shoots and insects. They are plentiful throughout the Hawdon and Poulter valleys.

This critically endangered, canopy-feeding parakeet can be seen in the Hawdon and Poulter valleys. It is generally quieter than the yellow-crowned parakeet and is greatly outnumbered by them in these forests. 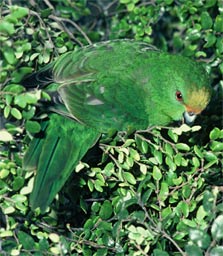 The narrow frontal band, just above the bill, is orange in the orange-fronted parakeets and dark red/crimson in the yellow-crowned parakeets.

Flocks of parakeets in these valleys can contain both species.

Again, somewhat rare around Arthur’s Pass village. They can be seen almost anywhere in the forests on the western side of Arthur’s Pass National Park or, occasionally, up Edwards valley by the hut or in some of the larger river valleys in the east; such as the Waimakariri headwaters.

These birds can only be seen on the far western perimeter of the park - try Kellys Creek. They are more common on the coastal fringes throughout Westland. 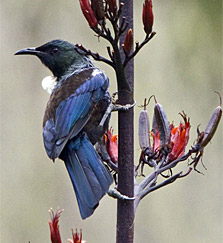 Commonly found in pairs around high-country rivers and pastureland.

Shining cuckoos/pipīwharauroa and long-tailed cuckoos/koekoeā move in to our forests between November and February. These birds can be difficult to see but have very distinct calls. Shining cuckoo calls are a series of soft, rising whistles followed by longer descending whistles. Long-tailed cuckoos have a loud ‘zweeeeet, zweeeeeet’ screech, often calling from the top of the canopy.

The following birds can be found around the village along the forest edge, or on any of the valley walks, in particular the Arthur's Pass Walking Track, Scotts track and the Bealey Valley track: