Located in Aoraki/Mount Cook National Park in the Canterbury region

Hooker Hut has been removed.

Hooker Hut has been removed due to the threat of it slipping into the glacier below. This historic hut, the oldest in Aoraki/Mount Cook National Park, will be relocated in due course.

The hut is situated beside the Hooker Glacier some 16m from the moraine wall. The building is timber framed, with corrugated iron clad walls and roof. The floor is tongue and groove. The hut has two rooms, two entrances and an internal door between the two rooms.

As with most other structures in this park this hut occupies an outstanding site, just below the Hooker Glacier. 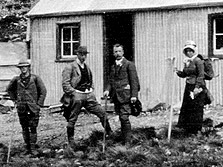 Turn of the century climbers outside the Historic Hooker Hut

Hooker Hut was built to a plan by Mt Cook chief guide Peter Graham, and guides Jim Murphy and Darby Thompson. Its purpose was to provide a base for climbing in the area by providing shelter for parties crossing the divide or making trips to the upper reaches of the Hooker Glacier. First a track had to be completed so building materials could be carried seven miles up the Hooker Valley by packhorse. In the winter of 1910 an avalanche blocked the track and for the last two miles materials had to be carried by Peter Graham and his team. In 1948, when the hut was partly rebuilt, the materials were dropped onto the site by aeroplane. As a result of glacial retreat the moraine on which the hut was sited has progressively collapsed, threatening the hut. In 1963 it was moved back 40m onto new foundations, and it was shifted again in 1994.

Hooker is the oldest surviving hut in Mount Cook National Park. Although altered and shifted twice, these changes can be viewed as part of the evolution of hut management and use. This hut complements two other similar but unaltered huts in neighbouring Westland National Park.

From its original site the hut was visible from The Hermitage and was considered a landmark. The hut has sheltered climbers and trampers for nearly 90 years and is the oldest purpose built hut in the Mt Cook National Park. It is the "home" of a famous alpine ghost, as recounted by Peter Graham (in Peter Graham: Mountain Guide) and others.

Historic Hooker Hut has been removed from its precarious position above the crumbling moraine wall of the retreating Hooker Glacier, in Aoraki/Mt Cook National Park.