With the ultimate goal of returning takahē to the wild, the Takahē Recovery Programme is working hard to help ensure takahē continue to move further away from the brink of extinction.  Pick your favourite takahē to help support their recovery.

Sponsor* a takahē for yourself or as a gift for somebody special.

Bronze, Silver and Gold sponsor packages all include:

Select a takahē and the level of sponsorship you'd like to make.

DOC can not provide this service

This service has been affected by COVID-19, and we can not provide it at this time. 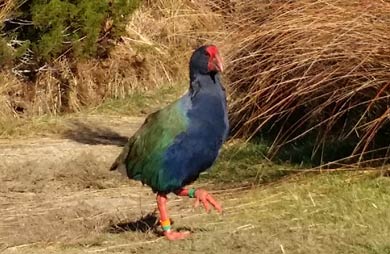 Scoop, fondly named after the young journalist who reported the story of Dr Orbell rediscovering the takahē in the Murchison Mountains in 1948. He filed the story late in the afternoon, unbeknown to him that it would make international news by morning.

Scoop is a confident young fellow and can regularly be spotted around the Gouland Downs Hut on the Heaphy Track. 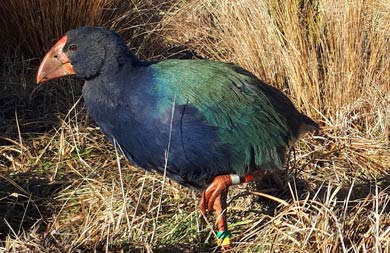 Ehara, meaning 'surprise' was aptly named as she was produced from her presumed infertile parents Paku and Quammen.

Making the news as a miracle chick she was an unexpected but welcomed addition to the takahē population.

Raised by her foster parents at the Te Anau Bird Sanctuary, we hope Ehara will go on to successfully contribute to building the Kahurangi takahē population.

* Sponsorship of individual takahē are not exclusive. Multiple people can sponsor the same bird. As takahē are a taonga (treasured) species to New Zealand Māori, the sponsorship is symbolic and does not entitle people any ownership of the birds.