The upcoming takahē breeding season is more secure than ever thanks to two new purpose-built enclosures. 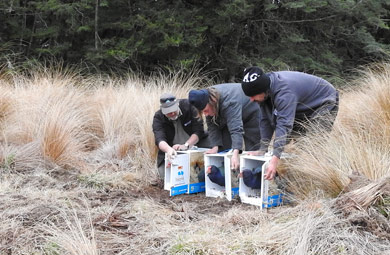 Six takahē breeding pairs now have two new secure territories to raise their chicks in this spring at the Burwood Takahē Centre near Te Anau and Maungatautari Ecological Island near Hamilton.

The Department of Conservation's Senior Takahē Ranger Glen Greaves says the new enclosures are a really positive result for the Recovery Programme in helping support the growing takahē population.

"The enclosure expansion has been a long time in the planning, and the final touches were being made by the team this month with the birds destined for Kahurangi National Park unexpectedly staying on to spend the breeding season at Burwood," explains Glen.

"With last year's juveniles coming in behind also needing space, the increased holding capacity has put us in a good place to deal with this change of plan."

Secure, predator controlled breeding territories are crucial to the species' survival, giving vulnerable chicks a chance to mature. Across the two new secure enclosures, there will be capacity for up to 50 birds.

The Burwood Takahē Centre, the hub of the breeding programme, is the most productive of all the takahē breeding sites.

At nearly 135ha, the new Burwood enclosure nearly doubles the area of the original, built in 1987.

"This pen has been a critical part of the Programme for 30 years, not only as a breeding site, but also in providing habitat that is a perfect training ground for juveniles before being released in wild sites, such as the Murchison Mountains," Glen explains.
Over 200 juveniles have been successfully raised in the old enclosure.

At Maungatautari, the brand new Coopers Pen, enclosing 3ha of known successful takahē breeding habitat located on the mountain, was two years in the making and is now home to birds Brodie and Puiaki.

Both new enclosures were made possible through support from Mitre 10, official supplier to the Takahē Recovery Programme and over 1000 volunteer hours.

"Being based in Te Anau we have a great working relationship with our local Mitre 10 team, they are passionate about takahē and are always ready to help us problem solve the unique challenges we face at Burwood. We are also very fortunate to have such great support from volunteers" says Glen.".

Following a blessing of the pen from Jade Maguire from Ōraka-Aparima Rūnanga, 30 birds were released into the enclosure, including 5 breeding pairs.