Takahē have special cultural, spiritual and traditional significance to Ngāi Tahu, the iwi (Māori tribe) of most of New Zealand’s South Island. Ngāi Tahu value takahē as a taonga (treasure) and they continue to act as kaitiaki (guardians) of the takahē by working with DOC to protect this precious species.

Are they just fat pūkeko?

No! Although they look similar to their distant relative the pūkeko/purple swamp hen (that are common and can fly), takahē are much larger and more brightly coloured. Takahē weigh between 2.3 – 3.8 kg.

Takahē are larger with stout legs and more colours; pūkeko are blue with a black back
Image: Shellie Evans ©

Takahē have stout red legs and a large, strong red beak. Their feathers range from a dark royal blue head, neck and breast, to peacock blue shoulders, through to shades of iridescent turquoise and olive green on their wings and back. They have wings, but only use them for display during courtship or as a show of aggression.

Because of their highly fibrous diet, they can poo up to 9 metres a day.

Takahē only breed once a year, raising 1–2 chicks. Pairs will fiercely defend their territories. Families need a lot of space, with territories ranging between 4–100 ha, depending on the availability and quality of their food.

In the wild, takahē inhabit native grasslands. They eat mostly the starchy leaf bases of tussock and sedge species, and also tussock seeds when available. If snow cover is heavy, they will move to the forest and feed mainly on underground rhizomes of the summer green fern. 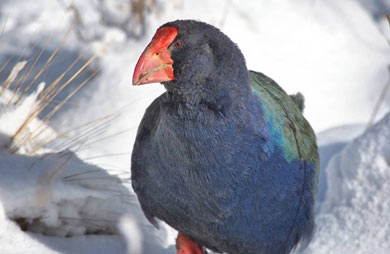 Takahē may retreat to forest for shelter when snow is thick
Image: Servane Kiss © 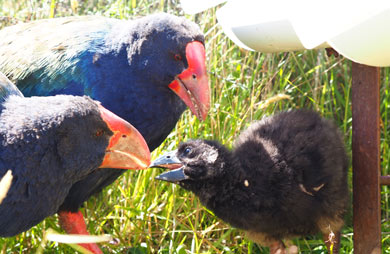 Takahē have 1 or 2 chicks a year
Image: DOC

Mammalian predators are the biggest threat to takahē. In 2007, there was a stoat plague that halved the takahē popluation in the Murchison Mountains.

Deer love to browse on the same tussock species as takahē do. Unfortunately, this affects tussock growth and can impact on takahē food and habitat.

Takahē once roamed across the South Island, but pressures from hunting, introduced predators, habitat destruction and competition for food led to their decline.

After being presumed extinct for nearly 50 years, the takahē was famously rediscovered in 1948. Geoffrey Orbell, a physician from Invercargill and his party, found the last remaining wild population of the bird high in the tussock grasslands of the remote Murchison Mountains, above Lake Te Anau, Fiordland.

Today takahē are classified as Nationally Vulnerable, with a population of just over 400 birds.

DOC's dedicated Takahē Recovery Programme is working hard to grow this number and establish self-sustaining wild populations within their former range, the native grasslands of the South Island.

Through the Takahē Recovery Programme, you can help by sponsoring a takahē, visiting a sanctuary site, and keeping up to date with conservation work.

You can meet a takahē at several sites around the country. In the wild, takahē only exist in the Murchison Mountains, Fiordland National Park and more recently Gouland Downs in Kahurangi National Park.