Takahē sets out for home

The year-old female bird, named ‘Mahia’ by iwi, was hatched on predator-free Kapiti Island, where her parents Bargie and Ihi are part of a national breeding programme. She will be joining the last of her kind at the remaining wild takahē population in the Murchison Mountains of Fiordland. 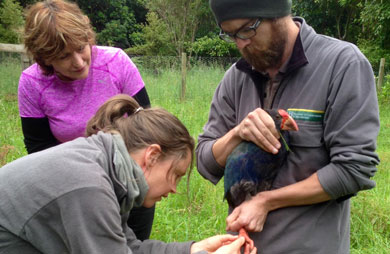 “We hope Mahia will be part of boosting numbers of these critically endangered birds in the wild,” said Kapiti Island ranger Genevieve Spargo. “The wild flock has a higher number of males than females so she is an even more valuable contribution to this population.”

Mahia will get special treatment on her journey – she will occupy a seat on an Air New Zealand flight from Wellington to Queenstown via Christchurch, safely stowed inside her purpose built travelling case.

Before her release into the wild, Mahia will attend ‘tussock eating school’ at DOC’s Burwood Takahē Centre in Te Anau. 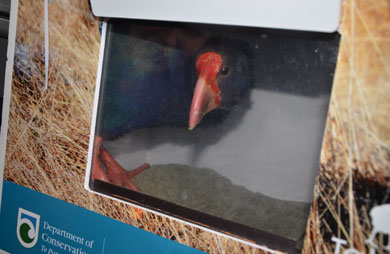 “Tussock stems are the main natural food source for takahē,” said takahē ranger Glen Greaves, “and young birds need to learn this behaviour from other adults before they can thrive back in their natural habitat.”

All takahē in New Zealand are descended from the population in the deep south, where they were rediscovered in 1948 after fears they were extinct. A 50,000 ha special area within Fiordland National Park has been set aside to protect the large flightless birds. Unfortunately, their wild home still needs special safeguards, and DOC is putting in place New Zealand’s biggest trapping network to protect the birds from stoats.

Almost two thirds of the total takahē population is now found at various pest-free sites around New Zealand, such as Kapiti and Mana islands in Wellington.

Takahē numbers have climbed to over 65 breeding pairs on island and mainland island sites, but still require intensive management, with a goal to reach 90 breeding pairs. This breeding programme relies on ongoing transfers between takahē sites, which is where Air Zealand steps in. It’s not too unusual to see them occupying a seat on Air New Zealand flights.

Five years of support for the programme from Fulton Hogan was announced in July this year. Their $1 million contribution will make it possible to establish a new large wild population in the South Island high country, further safeguarding the species’ future.