DOC has closed Manaia Sanctuary and the Hukarahi Block to prevent the spread of kauri dieback.

The Department of Conservation has closed public access to Manaia Sanctuary and Hukarahi Block, located on the Northern Coromandel Peninsula to prevent the spread of kauri dieback. 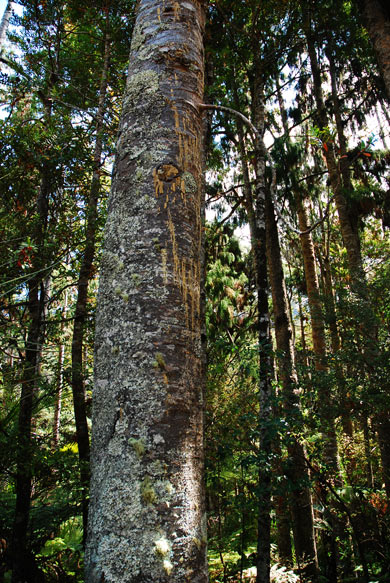 No kauri dieback has been detected in the 495 hectare remote Manaia Sanctuary, and the closure is a proactive measure to protect high ecological value trees – a step supported by the local community.

The 377 hectare Hukarahi Block, located north of Whitianga, first tested positive for kauri dieback in 2013 and has been closed since. This is an extension of existing closures. The block has no public access and the closure is a proactive step to contain the spread of kauri dieback.

"DOC is taking an active approach to managing kauri dieback. We are starting work on a 735 km, 200 track mitigation project to protect kauri from dieback in April 2016. We also provide boot-spray and cleaning facilities at popular track entrances, provide public education on how to reduce the spread of the disease, and contribute to a multi-agency effort," says Dale Tawa, DOC Operations Manager Coromandel District.

"We accept and support all practical measures, including rahui and closures, which may help stop the spread of kauri dieback. The action by Ngati Whanaunga in applying customary practice measures to protect their own taonga makes good sense."

"Positive actions by iwi and other private landowners and forest owners will support DOC's own approach to preventing the spread of this disease."

Kauri dieback is caused by the microscopic spore Phytophthora taxon Agathis (PTA). It attacks the tree's roots and destroys tissues that carry water and nutrients, gradually starving kauri to death. Nearly all infected trees die and there is currently no cure.

PTA can be spread easily through mud and water contaminating footwear, vehicle tyres and machinery without proper disinfection. Having people clean mud from footwear and equipment before and after entering a kauri forest is currently the best solution to stop the spread of the disease.

Meanwhile, the multi-agency Kauri Dieback Management Programme continues research into the cause of the disease, its spread, and possible treatments.

Kauri dieback is the deadly kauri disease caused by Phytophthora taxon Agathis. Following DNA studies, this fungus-like disease was formally identified in 2008 as a distinct and previously undescribed species of Phytophthora. Kauri dieback is specific to New Zealand kauri and can kill trees of all ages.

Microscopic spores in the soil infect kauri roots and damage the tissues that carry nutrients within the tree. Infected trees show a range of symptoms including yellowing of foliage, loss of leaves, canopy thinning, dead branches and lesions that bleed gum at the base of the trunk. Nearly all infected kauri die. In the past 10 years, kauri dieback has killed thousands of kauri in New Zealand.

Scientists are currently working to find control tools for this disease but there is no known treatment at this time.

Enjoy long sandy beaches and pōhutukawa-clad coastline in the Northern Coromandel, at the top of the Coromandel Peninsula.