A search for the elusive Fiordland crested penguin/ tawaki in Milford Sound/ Piopiotahi has revealed the birds to be thriving.

The Tawaki Project, a collaboration between the Department of Conservation, University of Otago, Global Penguin Society, and West Coast Penguin Trust, is the first major research on tawaki numbers since the 1970s. The project aims to identify sea-based factors that influence the penguins' foraging and breeding success along the coastlines of South Westland, Fiordland, Stewart Island and Codfish Island. 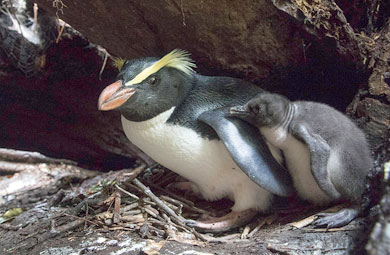 "This not only makes the birds difficult to observe, but also challenging to study. As a result, very little is known about the species."

However, with tip-offs from local operators, their search revealed more than 60 breeding pairs in Milford Sound/Piopiotahi.

"There are still areas we haven't searched," said Thomas Mattern, "and from what we have seen this year, there might be more than 100 breeding pairs in Milford Sound."

"We used tape in various colours to attach the devices, which made the birds easy to identify by boat skippers, nature guides and visitors. Southern Discoveries collated this information turning the Tawaki Project into a true citizen science venture." Thomas Mattern said.

The 2016 survey also confirmed previous years' findings that while tawaki on the West Coast travel up to 100km from their breeding colonies in search of food, those in Milford Sound/Piopiotahi seldom travelled further than half way up the fjord.

The news, however, wasn't all good for the project team. At Jackson Head on the West Coast, they witnessed the devastating effects of stoats on the penguins:

"Within a matter of days almost all the eggs and chicks of the entire penguin colony – around 150 breeding pairs – were wiped out by stoats." Thomas Mattern said.

"Stoat trapping in Milford Sound has enabled the population there to thrive. However, without any predator control in place, the reproductive outcome of tawaki at Jackson Head was close to zero for the second year in a row."

Tawaki are the third rarest penguin species world-wide, behind the Galapagos penguin and the yellow-eyed penguin. The current population is thought to be between 2500 and 3000 breeding pairs and has been in decline since the 1950s.

For more information about the Tawaki Project see:

The Fiordland crested penguin or tawaki, is one of the rarest of New Zealand’s mainland penguins.

Milford Sound/Piopiotahi is in the northwest of Fiordland National Park. Milford Road from Te Anau to Milford Sound is one of New Zealand's most scenic drives.