The Department of Conservation is urging fishers to take care using set nets in Tasman and Golden bays after two endangered Hector’s dolphins were found dead in Tasman Bay in recent days, one in a set net.

The Department of Conservation is urging fishers to take care using set nets in Tasman and Golden bays after two endangered Hector’s dolphins were found dead in Tasman Bay in recent days, one in a set net.

A recreational fisher found a Hector’s dolphin calf that appeared dead in his set net near Wakefield Quay in Nelson city on Friday 9 January. A dead adult Hector’s dolphin was then found off lower Queen Street near Richmond on Sunday 11 January.

The cause of the dolphins’ deaths is still to be determined. The calf is to be autopsied at Massey University to establish how it died. The adult is too decomposed to autopsy and it has been buried. 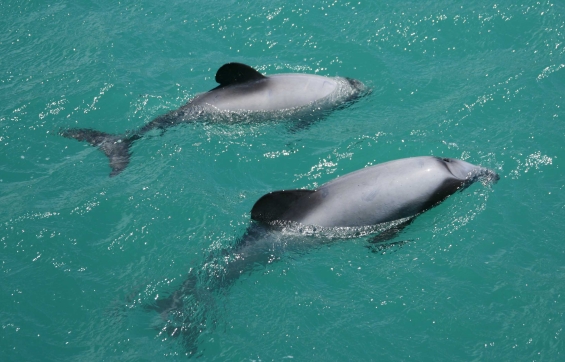 A Hector's dolphin and calf

Set netting poses a major threat to Hector’s dolphins which are unique to New Zealand. They are only found in inshore waters, often close to shore, making them vulnerable to getting entangled in set nets and drowning, particularly when seawater is murky reducing visibility.

DOC Acting Motueka Conservation Services Manager Chris Golding said the young Hector’s dolphin had been accidentally caught in the set net and the recreational fisher had done the right thing in reporting it to DOC.

“Until we get the autopsy results we don’t know whether the calf died as a result of being caught in the set net or if it was already dead.

“The adult dolphin was possibly the calf’s mother. It had been dead for some time when found.

“Hector’s dolphins are known to be in Golden Bay and have been seen off Abel Tasman National Park and other western areas of Tasman Bay. There have been a few reported sightings of Hector’s dolphins in the last couple of years off Nelson and Rabbit Island.

“The finds of the two Hector’s dolphins in Tasman Bay serve as a reminder that care is needed in use of set nets to avoid accidentally catching dolphins.

“To help protect Hector’s dolphins and other dolphins and whales, care should also be taken in boats around them. Boaties should keep at least 50 metres away from whales and operate a ‘no wake’ or idle speed within 300 metres of whales and dolphins.”

Anyone catching a marine mammal in a set net must report it to the Department of Conservation or the Ministry for Primary Industries. DOC is also asking people to report sightings of Hector’s dolphins. Reports can be made to 0800 DOC HOT (0800 362 468).

DOC is also keen to know about sightings of other whales and dolphins, especially southern right whales, blue whales and humpback whales. Sightings can also be reported on the online marine mammal sighting form.