Only found in New Zealand’s waters, this distinctive grey dolphin with black and white markings and a round dorsal fin is the most easily recognised species of dolphin in New Zealand. Hector’s dolphins are among the world’s smallest marine dolphins, growing to around 1.5m in length. They are found only in the inshore waters of Aotearoa/New Zealand.

They are the only dolphins in New Zealand with a rounded black dorsal fin. Their bodies are a distinctive grey, with white and black markings and a short snout.

Hector’s dolphins are found around the coast of the South Island but distribution is patchy.

Populations are concentrated between Haast and Farewell Spit in the west, around Banks Peninsula in the east, and Te Waewae Bay and Porpoise Bay/Te Whanaga Aihe in the south.

Hector’s dolphins are known to live to a maximum of about 20 years.

Like other dolphins, Hector’s use echolocation to find their food. They send out high frequency ‘clicks’ that bounce off surrounding objects and fish, giving the dolphins a detailed picture of their surroundings. This sonar is not used all the time, which may be one of the reasons why the dolphins get caught in nets.

Most females only have four or five calves in a lifetime. Calving usually occurs between November and mid-February, and calves stay with their mothers for up to two years.

Dolphins and people have shared our coastal waters and bays for centuries. In recent years, there has been a worldwide increase in awareness of marine mammals and a greater desire to protect them.

Set net fishing poses a major threat to Hector’s and Māui dolphin. Like all marine mammals they need to come to the surface regularly to breathe. If they become tangled in set nets, they will hold their breath until they suffocate.

Because these dolphins occur close inshore, often in bays and harbours, they are at risk of being injured by boats. Newborn dolphins are particularly vulnerable as they swim relatively slowly, close to the surface. Some have been killed by boat propellers when unwary boaties have run them over.

A hector's calf killed by a boat propeller

The Banks Peninsula marine mammal sanctuary in Canterbury was established in 1988 primarily to reduce set-net deaths of Hector’s dolphins in the area.

Set-net controls were introduced to Canterbury in 2002 and in west coast North Island in 2003.

DOC, in a joint initiative with the Ministry of Fisheries developed a Draft Threat Management Plan released in 2007.

Research and scientific studies continue to increase our knowledge about each sub-species’ ecology, conservation status, life history, and threats.

Improved management practices are continually being sought for these dolphins in an attempt to ensure their survival into the future.

Read about the 2018/19 review of The Hector's and Māui dolphin Threat Management Plan.

2016: Results of 2015 seasonal aerial surveys undertaken to update Hector’s dolphin abundance and distribution estimates along the west coast of the South Island. Together with similar surveys and analyses of the east coast in 2013 and south coast in 2010, the estimated South Island population of Hector’s dolphin is now 14,849 (CV: 11% 95% CI 11 923-18 492), double the previous estimate from surveys conducted in the late 1990s – early 2000s.

Find out more about our work with hector's dophins:

Black Cat Cruises commissioned an economic impact assessment of Hector's dolphin eco-tourism at Banks Peninsula. The report found that Hector's dolphin tourism is an important part of the Banks Peninsula economy and the wider Christchurch region. The relatively high incidence of Hector's means that eco-tours afford almost guaranteed sightings on every trip. This high success is important in drawing many tourists to Banks Peninsula and Christchurch, and to New Zealand. It is estimated that eco-tourism (tour operators and tourist spend) generates economic impact equivalent of $19.5 million in value added which sustains the equivalent of 416 jobs in the Canterbury economy.

The Department commissioned a peer review of the M.E Consulting assessment which found that the total economic value of Hector's dolphin (beyond eco-tourism and accounting for non-market values) will be much greater than is presented here. Other areas to consider are: future growth, value from other whale watching/eco-tourism operations in other parts of New Zealand, and value from Hector's dolphin tourism where there are no tour-operators.

If you have spotted a Māui or Hector’s dolphin in Taranaki, Wellington, Wairarapa, Hawke's Bay, Bay of Plenty, east coast Auckland, or Northland, our staff might contact you via phone or radio, and may attempt to collect a genetic sample on arrival. If you are unable to call, you can report the sighting online.

We need beachgoers and boaties to report sightings so we can better understand where these dolphins live. This will provide evidence to make the best decisions for Māui and Hector’s dolphin conservation.

If you need help identifying species, download the marine mammal sighting form (PDF, 416K) or (Word, 4,300K). You can use the images and descriptions to find out which species of dolphin you observed. 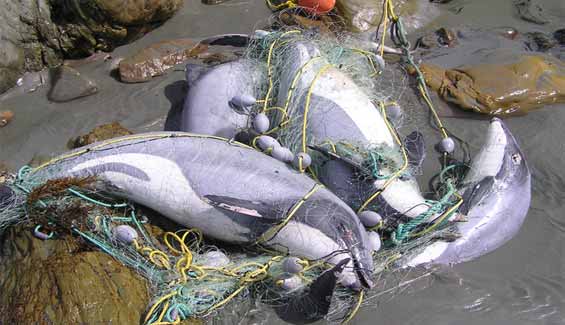 Read about the reviews of the Threat Management Plan.

Hector's dolphin is New Zealand's smallest dolphin. These native dolphins are endangered in New Zealand. Find out how to behave when sharing the water with Hector's.