Conservation Week was started in 1969 by The New Zealand Scout Association. 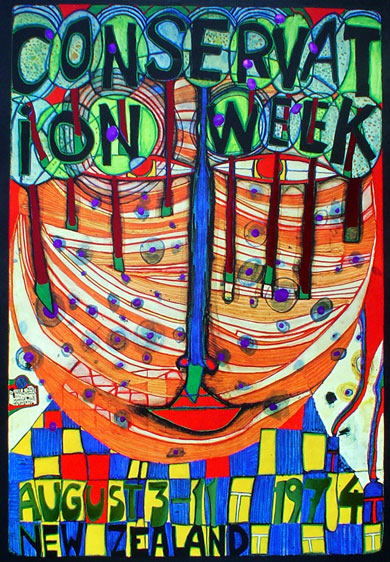 The iconic 1974 poster by Friedensreich Hundertwasser

1969 was the year when Richard Nixon took office as the US President; Apollo 11 landed on the moon; the Woodstock festival was held in upstate New York; and both Sesame Street and Monty Python's Flying Circus aired on television for the first time.

In New Zealand the Auckland Harbour Bridge was widened from 4 to 8 lanes; blood and breath alcohol limits were first introduced for drivers; and Dougal Stevenson read the first nationwide news bulletin to be broadcast simultaneously around the country.

In 1969 the "Save Manapouri" campaign was launched. So was Conservation Week.

Selwyn Field, the Chief Executive Commissioner of The New Zealand Scout Association, came back from the 1967 World Jamboree in Idaho inspired by the use of conservation trails for education. He pressed for a public education campaign about conservation, which was launched at the 1969 Scout Jamboree in Kaiapoi.

This was followed by Scouting organising the first Conservation Week, with the goal to promote greater interest in the environment and encourage people to take practical actions to look after it.

The Scouts published a brochure “This Precious Land” in 1968 which – from the third edition onwards – became a regular Conservation Week feature at a bargain price of 20c.

The Minister of Forests and Minister of Lands, the Hon Duncan MacIntyre, was very impressed with the activities that took place, and decided there should be a Conservation Week every year. 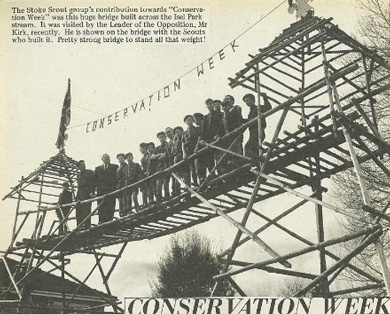 The Nature Conservation Council was responsible for the campaign from 1970. This was an advisory group administered by the Lands and Survey Department to advise on scientific and technical matters around “nature conservation”.

The Nature Conservation Council appointed people to the Conservation Week Campaign Committee (renamed Conservation NZ from 1981), that was set up to organise the annual campaign. During the 1970s the Government provided annual funding of $30,000 to $42,000 to promote the week, but this ceased after 1981.

The campaign continued with sponsorship from organisations such as the Post Office Savings Bank, Caltex Oil NZ, Mobil Oil NZ and The Todd Foundation to produce posters and educational material.

The range of posters from the past include designs from famous artists Friedensreich Hundertwasser and Don Binney, and cartoonists Murray Ball and Burton Silver.

Early campaign posters illustrated concerns about urbanisation, industrialisation, and pollution. A focus on native species came later as the understanding of conservation deepened.

Stickers and bookmarks were both very popular items during the 1970s and 1980s, and were regularly produced for Conservation Week.

Snapshot of past posters

Conservation Week posters of the past by various artists