The Māui dolphin is on the edge of extinction. Find out what's special about it.

On the edge of extinction

A recent estimate of the Māui dolphin population indicated that approximately 63 individuals over one year of age remain.

Like the kiwi, the Māui dolphin is an important part of New Zealand’s natural heritage. If we don’t take care of them, this endemic dolphin will be lost forever.

Big steps forward have been taken to help protect Māui dolphin. There has been a ban on set netting and trawling along part of the North Island’s west coast, and more stringent controls over petroleum and mineral prospecting and mining.

How you can help Māui dolphin. 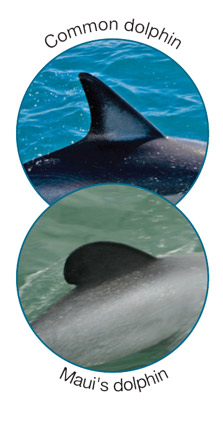 Māui dolphin are particularly vulnerable to decline as they have short lifespans, and are slow to reproduce.

Māui dolphin can 'see' with sound

Like other dolphins, Māui use echolocation to find their food. They send out high frequency clicks that bounce off surrounding objects and fish. These echoes are interpreted by the dolphin as a detailed picture of its surroundings.

Echolocation is a powerful tool, allowing dolphins to see fish hiding under sand and navigate murky waters. Although Māui dolphin do not use this sonar ability all the time, which may be why the dolphins get caught in nets.

Whereas many other species of dolphins communicate with whistles, Māui and Hector’s dolphins use short, high frequency clicks. These clicks are at such a high frequency, the human ear can't hear them, although the dolphins can!

They may also use a variety of other methods to communicate, such as slapping their tail on the water or leaping into the air.

These clicks were originally at a frequency of around 125 kHz (the human hearing range ends at about 20 kHz) and were slowed down to 1/20th of the speed to make them audible.

If you come across a group of Māui dolphin, it won’t be a nuclear family of the parents and the kids. They likely have a social structure similar to Hector’s dolphins, where group members commonly change companions.

Māui dolphin feed on a variety of species of fish, such as red cod, āhuru, and sole. They feed throughout the water column, on both bottom-dwelling fish and free swimming prey.

Māui dolphin are thought to have been isolated from their more numerous relatives, South Island Hector’s dolphin, for 15-16,000 years. This was around the same time the North Island shoreline split from the South Island during the Pleistocene.

They used to be known as the North Island Hector's dolphin but since 2002 they have been classified as separate subspecies.

Māui dolphin could once be found along most of the west coast of the North Island, from Cook Strait to Ninety Mile Beach. Today, they are found from Maunganui Bluff to Whanganui, and you’re most likely to spot one between Manukau Harbour and Port Waikato.

Māui dolphin are generally found close to shore in small groups. They are usually seen in water less than 20 m deep but may also range further offshore.

They use the mouths of the Manukau and Kaipara harbours, and are often seen just outside many of the other harbours on this coast.

Studies suggest that the dolphins use about 30 km of shoreline, and some individuals have been recorded moving nearly 80 km in under three weeks.

Māui dolphins’ use of harbours and their close inshore distribution means that the same waters we use for fishing and recreation are also their home.