New Zealand is a global hotspot for this species, along with the waters off California (US), South Africa, Australia and Japan.

They have been protected in our waters since April 2007.

White sharks (Carcharodon carcharias) are globally distributed in temperate and tropical waters, including the Mediterranean Sea. In New Zealand waters they occur throughout the Exclusive Economic Zone north of about 53oS (Campbell Island). Little is known of habitat use in New Zealand waters. Juveniles and adults occur in shallow coastal waters, including large harbours and estuaries. Sub-adults and adults also occur in the open ocean, as well as around offshore islands and banks. 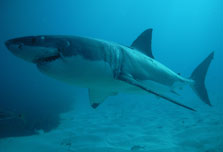 Genetic and satellite tagging studies demonstrate movement of white sharks between New Zealand, Australia and the southwest Pacific, and Australia and South Africa. Details of these movements are complex and the motivation for them remains uncertain. They involve rapid movements along continental shelves, rapid transoceanic return migrations, temporary residence in what appear to be favoured feeding areas and possible differences between mature females and the rest of the population.

Satellite tagging of New Zealand white sharks has shown that juveniles and adults migrate seasonally, from March to September, between aggregation sites at Stewart Island and the Chatham Islands to the tropical and subtropical Pacific (i.e. northern New South Wales and Queensland, islands and seamounts in the Coral Sea, Norfolk Island, New Caledonia, Vanuatu, Fiji and Tonga). These sharks appear to spend at least 5-7 months north of New Zealand before returning, often to the exact place where they were tagged.

Interestingly no movement between New Zealand tagging locations or between the Chatham Islands and the east coast of the South Island has been documented. However the movements of these sharks overlap with each other north of New Zealand. Little is known of the movements of white sharks, including small juveniles and large females, which occur off Northland and the west coast of the North Island.

In South Africa and Australia juvenile white sharks have been shown to make extensive return migrations along the continental shelf. The timing of these is thought to be related to the migrations of important prey species such as the sardine run in South Africa, and spawning of snapper in Australia. Genetic research indicates that like many other sharks female white sharks return to the same areas they were born in to give birth.

The North Atlantic white shark population has been estimated to have declined by more than 90%. Although it is widely accepted that there has been a substantial decline in abundance in the North Atlantic this estimate remains controversial, and there are signs that the population is recovering following protection. Data from protective beach meshing (shark net) programs in South Africa and Australia indicate abrupt declines in abundance following introduction of the nets, however the South African population appears to have stabilised.

No data that could be used to determine population trends in New Zealand waters exists. As commercial fishers do not target this species and it is a relatively rare by-catch non-reporting is common, making any estimates of abundance based upon reported catch or landings unreliable.

White sharks are apex predators and may play an important role in controlling the populations of important prey species. Although they may be encountered anywhere within New Zealand’s Exclusive Economic Zone, they are most frequently observed in areas close to large seal colonies.

Their large size, habit of feeding on large prey such as marine mammals and their propensity to investigate objects floating at the surface by biting them makes shark attack a potential risk for anyone swimming, diving, surfing or operating a small vessel (such as a kayak) in areas frequented by white sharks. Despite this attacks by white sharks on humans are relatively rare in New Zealand, even in areas where they are seasonally abundant.

Age is estimated from counts of calcified rings on the vertebrae. It is assumed that, like most other sharks, these rings are laid down annually. Maximum age is unknown but likely to be between 30 to 40 years. Female age at maturity is estimated to be around 15 years, and male age at maturity around 7-9 years. All age and growth studies of white sharks have so far been confounded by relatively small sample sizes and few samples from mature females.

Little is known of white shark breeding in New Zealand however most records of pregnant, newborn, and 1-2 year old white sharks are from shallow coastal waters around the top half of North Island. Sexual segregation does not appear to occur, with both mature and immature males and females being observed together at seal colonies in southern New Zealand. Small white sharks generally avoid larger individuals.

Tagging studies suggest white shark movements are independent of each other indicating they generally lead solitary lives but multiple individuals are regularly observed around seal colonies, feeding on whale carcasses and at whale strandings. 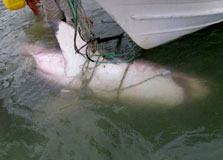 The major threats to white sharks are unmanaged incidental catch in commercial and artisanal fisheries, and directed sport and quasi-commercial fishing for trophies.

White sharks’ habit of returning to and aggregating in particular areas increases their vulnerability to directed fisheries.

Indirect threats to white sharks include declines in the abundance of important prey species due to changes in coastal productivity, habitat loss and pollution.

Increasing development pressure on coastal ecosystems has the potential to degrade important inshore breeding and feeding habitats for white sharks and a wide range of other marine species.

White sharks are classified as Vulnerable globally by the IUCN Red List of Threatened Species.

White sharks (Carcharodon carcharias) are protected under the Wildlife Act 1953. This means it is illegal to hunt, kill or harm white sharks within New Zealand’s Territorial Sea and Exclusive Economic Zone (200 nm limit around New Zealand). Any offence under this Act is liable to a fine of up to $250,000 and two years imprisonment.

White sharks are also protected from fishing by New Zealand vessels operating on the High Seas under the Fisheries Act 1996.

International trade in white shark products is regulated under the Convention on International Trade in Endangered Species (CITES).

DOC leads the implementation of CITES in New Zealand and collaborates with other government agencies, including Customs, MAF and the Police to ensure that New Zealand’s obligations under the Convention are met.

White sharks are listed on Appendix II of CITES: therefore, import and export of white shark specimens requires a non-detriment finding (ensuring trade is not detrimental to the long-term survival of the species in the wild) and a CITES permit.

DOC issues export permits for CITES-listed species but protection under the Wildlife Act means all trade in white shark products in New Zealand is illegal.

DOC scientists conduct research on the distribution and biology of white sharks in New Zealand waters, and research related to fisheries interactions is contracted through the Conservation Services Programme.

Researchers use a variety of methods to determine the distribution and population size of white sharks, including individual photo-identification. You can contribute to this research by submitting images of sharks to the New Zealand white shark project on iNaturalist NZ – Mātaki Taiao.

It is not illegal to accidentally catch a white shark but it must be released alive and unharmed. Report the catch to DOC and/or Ministry of Primary Industries as soon as possible. DOC may request that dead sharks be landed for scientific research.

Shark cage diving offers tourists the opportunity to view sharks underwater at close range from the safety of a submerged cage attached to a boat.

Do not buy white shark products when travelling overseas.

As very little is known of the biology of white sharks dead specimens are of considerable scientific value.

Should you inadvertently kill a white shark notify DOC immediately. You may be requested to return the specimen to shore if this is practical. Useful information to provide with the specimen includes the location and depth that the fish was taken in.