Wētāpunga are very large insects, unique to New Zealand. The species has only survived on Hauturu-o-Toi/Little Barrier Island.

Wētāpunga is a New Zealand's giant wētā species and the biggest of this type. When fully grown they can even be heavier than a mouse or sparrow.

During the day they usually hide in dead foliage such as the drooping dead fronds of tree ferns, nīkau palms or cabbage trees. At night they leave their resting places to move around in trees or on the ground.

Adult wētāpunga only live for about 6-9 months, during which time they will mate repeatedly. The females lay many groups of eggs in soft soil on the forest floor.

Although wētāpunga were originally distributed across Northland, Auckland and Great Barrier Island (Aotea), the species has only survived on Hauturu-o-Toi / Little Barrier Island. Habitat destruction and predation from exotic pests saw to their demise.

It is fortunate these special creatures have survived, even if just in one place on Hauturu-o-Toi / Little Barrier Island. Successful breeding and translocation projects mean that they are also now present on Tiritiri Matangi and Motuora Islands.

To help safeguard this threatened species, an experimental breeding project was successfully undertaken by the staff at Butterfly Creek in South Auckland under the guidance of the Weta Recovery Group.

No-one had previously attempted captive breeding on this scale before, and much was learnt from being able to closely study their breeding habits.

From an initial 18 wētāpunga captured from Hauturu o Toi / Little Barrier Island, 25 adults or near adults were released on Tiritiri Matangi Island in December 2011.

A similar number of younger wētāpunga were released in September 2010 onto Motuora Island, another pest-free island in the Hauraki Gulf Marine Park.

The breeding project was joined by Auckland Zoo in May 2012 when staff captured 12 adult wētāpunga from Hauturu o Toi / Little Barrier Island and returned them to purpose built facilities at the Zoo.

Following lots of mating and egg laying activity, hundreds of baby wētāpunga began hatching in early 2013. These are called first 'instars' meaning they are the first growth stage after the egg.

The wētā were housed in purpose-built facilities at Auckland Zoo and reared both individually and in groups.

So many hatched that extra staff were brought in to help feed the many hundreds of growing wētāpunga with fresh foliage. 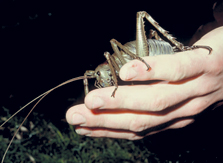 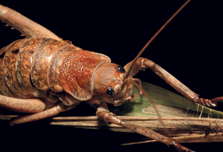 Auckland Zoo were extremely successful at breeding hundreds of wētāpunga.

There were so many that as well as rearing them in separate containers, many had to be reared in groups in larger cages, which had not been attempted before in the breeding programme.

Both methods of rearing were successful and produced a range of different sized wētāpunga for release.

In May 2014 150 adult or near adult wētāpunga were released onto Tiritiri Matangi. This significantly bolstered the population.

These will breed and add to the genetic diversity of those already present on Tiritiri Matangi from the earlier release.

The wētāpunga were installed in the bush in 'wētā apartments' made of sections of giant bamboo, with the open end pointing to the ground.

For monitoring purposes it is hoped that the wētāpunga will stay in the general vicinity of these 'apartments', although they will certainly want to find their own daytime resting places.

A similar number of younger wētāpunga were released in April 2014 onto Motuora Island to bolster that population.

These wētāpunga deserve to be back where they belong, on other island sanctuaries in the Hauraki Gulf.

The Wētā Recovery Group's plan is to establish several populations around the gulf, ensuring the survival of the species and their long term security.

By using captive breeding we can now improve the chances of the species surviving in the event of a catastrophe on Hauturu-o-Toi/Little Barrier that would have otherwise wiped them out forever.

You can also make a difference by becoming members of the community groups in the gulf like the Supporters of Tiritiri Matangi who are key to the ecological restoration of these islands.

You can also help by being careful when you visit special 'Treasure Islands' like Tiritiri Matangi. Wētāpunga need islands free of mammalian predators to survive.