Wētā have been around long enough to see dinosaurs come and go and to evolve into more than 100 different species, all of them endemic to New Zealand.

Wētā are incredible looking creatures. They range in size, but with their big bodies, spiny legs, and curved tusks, they are one of New Zealand's most recognisable creepy-crawlies.

Wētā have become icons for invertebrate conservation in New Zealand because many species are threatened or endangered. There are more than 100 species of wētā in New Zealand, 16 of which are at risk.

There are five broad groups of wētā:

Diet: Wētā are mainly herbivorous in the wild, but are also known to eat insects.

Habitat: They are nocturnal and live in a variety of habitats including grassland, shrub land, forests, and caves. They excavate holes under stones, rotting logs, or in trees, or occupy pre-formed burrows.

The Giant wētā/wētāpunga of Little Barrier is the biggest, and the Nelson alpine wētā the smallest at 7 grams.

The Mahoenui giant wētā, long considered extinct on the mainland, was rediscovered in a patch of King Country gorse in 1962.

Species of wētā continue to be discovered. One of the three tusked species, the carnivorous Jaws', was found by lizard expert Tony Whittaker on Middle Mercury Island off the Coromandel Coast 29 years ago; another of them in the Raukumara Ranges on the East Coast of the North Island as recently as 1995.

Many of the giant species now only survive on protected land and many are endangered. Little is known about the past distribution of wētā. 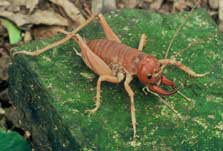 The decline of most wētā is due to three major causes:

One feature of wētā conservation is the lack of basic information on their distribution, abundance, and ecology. Furthermore, there can be a great deal of variation within individual species, despite the fact there is little genetic difference between them. So, the classification and conservation of wētā is an evolving process.

A recovery plan is currently in action. It exists as a guide that can be modified as new information and conservation priorities emerge. Threatened wētā recovery plan (PDF, 350K)

The potential for recovery is quite high for a number of reasons:

Build a home for wētā to protect them from being eaten by rats, stoats, cats and hedgehogs.

Cave weta are found all over New Zealand. They can appear terrifying but this video reveals that these wild-looking weta are actually harmless, deaf and probably more scared of you than you are of them.

Watch a video about the giant weta, which has been around for 190 million years, making it one of New Zealand’s oldest creatures.