Penguins are a unique group of flightless seabirds that are at home on land and in the sea. New Zealand has more penguin species on our shores than any other country.

Thirteen of the world’s 18 penguin species have been recorded in the New Zealand region (including the Ross Dependency). Nine of these species breed here.

Three penguin species breed on the New Zealand mainland, they breed alone or in small groups:

Unlike flying birds, which moult and replace their feathers gradually so that they can continue to fly, penguins moult all of their feathers at once. This enables them to go back out to sea without ‘leaks’ in their waterproof insulation. Moulting is a stressful time for penguins, and during this two to five week period in late summer birds may look sick and ragged. They are also highly vulnerable to predators at this time.

Skua (a large gull-like bird) and giant petrels are the penguin’s only avian predators and will both take poorly guarded eggs and chicks. Skua are also capable of killing adult blue penguins.

Habitat loss and change in climate

The yellow-eyed penguin is the New Zealand species most affected by habitat loss. A forest or shrubland nesting species, the yellow-eyed has come under pressure as forest has been replaced with pasture.

A slight warming of sea temperatures in the past 50 years is thought to have forced vital food species such as krill further south, with a subsequent impact on several penguin species.

Fisheries by-catch of penguins, and entanglement in discarded nylon fishing lines are also threats to penguins.

Spills of light fuel oil from fishing boats and the emptying of engine-room bilges. The oil coats penguins’ feathers and prevents them from insulating properly. Fortunately, these incidences are rare around New Zealand.

Penguins are also highly susceptible to human disturbance when nesting.

If you find a dead or injured penguin

If you find a dead penguin, leave it alone. Community groups regularly count dead seabirds and will remove them from beaches.

If a sick penguin is at risk from attack by dogs or other predators, place it under vegetation in the rear-dune well away from people. Or you can take it to a local bird rescue centre.

Do not give emaciated penguins food. The rehabilitation of seabirds requires specialist knowledge and training.

If a penguin is clearly injured or in immediate danger, contact the emergency hotline 0800 DOC HOT (0800 362 468). Try and give the exact location and take photos to help us make an assessment.

Download a rhyme card to remind you how to keep our wildlife safe around your dog: 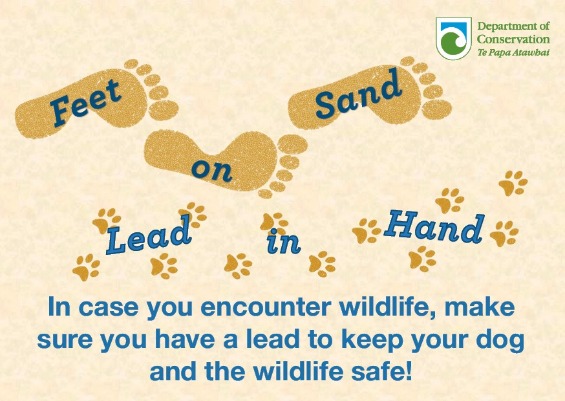 One of the 'Wildlife and your dog' rhyme cards