This work is licensed under the Creative Commons Attribution 4.0 International licence. In essence, you are free to copy, distribute and adapt the work, as long as you attribute the work to the Crown and abide by the other licence terms. To view a copy of this licence, www.creativecommons.org/licenses/by/4.0

Without urgent action, the bottlenose dolphins may become locally extinct as soon as 2022. Fortunately, we have a window of opportunity to ensure their protection.

This proposal has been developed by a roopu (group) of Ngā Hapū o te Pēwhairangi (Hapū of Te Pēwhairangi (Bay of Islands)) and the Department of Conservation Te Papa Atawhai.

Your feedback will help ensure that your views are taken into account in deciding on this proposal. We all have a role to play in shaping the development of this important mahi (work).

I look forward to hearing from you.

Thank you for your interest in protecting the marine mammals in

Te Pēwhairangi (Bay of Islands). This document shares the details of the proposed sanctuary. It has the following sections:

Section two is the core of this document. It covers:

Te Pēwhairangi (Bay of Islands) is a marine mammal mecca, with prominent tourism, seasonal visitors and cultural ties. Both iconic and lesser known species frequently visit the area. This includes:

Under the New Zealand Threat Classification Scheme these are classed as:

Marine mammals have a special place in New Zealand’s natural and cultural heritage, particularly with tangata whenua. Bottlenose dolphins are tohu (symbols) for Ngā hapū o te Pēwhairangi that measure the health of the wider marine ecosystem in Te Pēwhairangi (Bay of Islands).

In addition, encounters with Te Pēwhairangi bottlenose dolphins and other marine mammals are a primary focus of tourism in the area.

Te Pēwhairangi (Bay of Islands) is an important location as it provides a nursery habitat for marine mammals. They frequently spend time within the boundary of Tapeka Point and Whangaiwahine Point, and between Motuarohia (Roberton) and Moturua Islands.

"Mātauranga Māori encompasses a holistic world view. It starts from the heavens, comes down to earth and covers everything in between. Our ancestors imparted knowledge to us in waiata, legends and chants and there are words that keep being emphasised like whakapapa, mauri, oranga and kaitiakitanga. These all have relevance to the current kaupapa in front of us right now and are a major part of the long-term solution we are seeking. However,

He Whakaputanga 1835 and Te Tiriti o Waitangi 1840, Article 2, is also part of our narrative. Without delving into the details and the vastness of that history, it may just suffice to say that the intention and spirit of Te Tiriti was and still is to work together in partnership and to build a great nation.

Through this proposed marine mammal sanctuary, Mana Whenua and the Crown would have a perfect opportunity to set an example of working together on a common goal and to achieve a worthy outcome which is to protect and sustain our taonga, the dolphins."

The bottlenose dolphin is a taonga species for Te Pēwhairangi hapū. They are kaitiaki, protectors (guardians) of our people. Tohunga were known to call the dolphins. They are a gauge on the health of our fishery and moana and represent the closeness of the whānau.

Under section 4 of the Conservation Act 1987, the Department of Conservation Te Papa Atawhai is required to give effect to the principles of the Treaty of Waitangi.

Under Te Takutai Moana Act 2011, any whānau, hapū or iwi who consider they exercise kaitiakitanga in the proposed sanctuary area have a right to participate in the process and provide their views on the proposal.

The Minister of Conservation must have particular regard to the views of affected whānau, hapū and iwi in considering the proposal.

The problem is defined by two key issues

The bottlenose dolphin population is declining in Te Pēwhairangi (Bay of Islands), where uniquely high levels of interactions with people and vessels are affecting all marine mammals.

There are multiple subpopulations of bottlenose dolphins in New Zealand waters. Te Pēwhairangi (Bay of Islands) subpopulation is declining at a higher rate than any other subpopulation in the country;

There has been extensive study and research into the declining bottlenose dolphin population in Te Pēwhairangi (Bay of Islands).

The near-constant presence of people and vessels around bottlenose dolphins in Te Pēwhairangi (Bay of Islands) disrupts normal behaviours critical for survival, such as resting and feeding. This can cause stress, reduce reproductive success and make the dolphins prone to illness, which may have led to high calf mortality and subsequent decline in numbers.

Researchers have concluded that if pressures on marine mammals are not managed effectively, Te Pēwhairangi bottlenose subpopulation may become locally extinct by 2022. 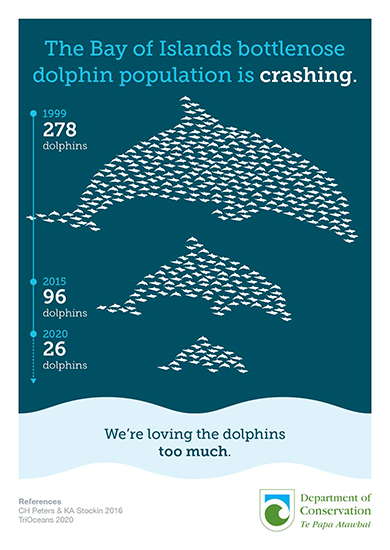 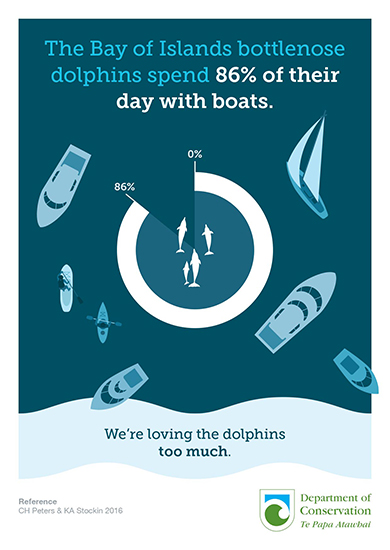 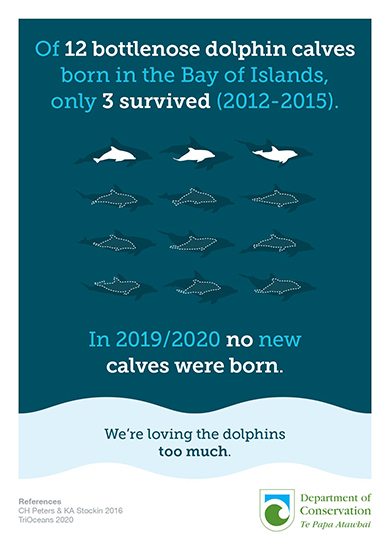 The MMPR regulate vessels in terms of their numbers, behaviour and distances around marine mammals.

In addition, the regulations allow for swimming with dolphins, if no juveniles are present. Swimming with dolphins poses significant risks to the dolphins because it requires closer vessel approaches. It is not uncommon for foraging or resting dolphins to be approached by vessels multiple times a day for swimming, causing them to change their behaviour over long periods of time. It is also difficult for the public to determine the age of a dolphin, and therefore swimming with juveniles occurs regularly, despite the MMPR restricting this.

Even with full compliance and further education about MMPR, bottlenose dolphins would still spend most of their day in the presence of people and vessels (up to three vessels at a time within 300 m are permitted).

We need to act quickly to protect the bottlenose dolphins of Te Pēwhairangi (Bay of Islands).

The Minister of Conservation proposes a new marine mammal sanctuary in Te Pēwhairangi (Bay of Islands) to address the problems above (Maps 1 & 2). The following restrictions within the sanctuary are proposed:

Vessel means every description of boat or craft used in navigation, whether or not it has any means of propulsion; and includes:

The following vessels would be exempted from all restrictions in the proposed sanctuary:

Any vessel with an existing marine mammal viewing permit under the Marine Mammals Protection Act 1978 would be exempt from proposed restriction 2. 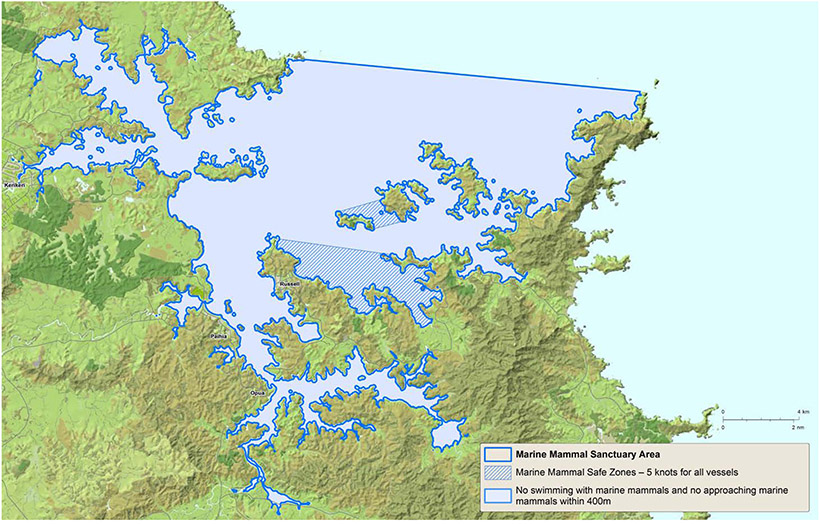 What are the implications of a sanctuary?
He aha ngā whakaritenga mō te tūrāhui?

Maintaining the status quo, no marine mammal sanctuary is established.

Maintaining the status quo would mean:

We’ve also drafted an impact analysis that describes the impacts that the proposed marine mammal sanctuary and its restrictions might have on you. It’s available on our website (www.doc.govt.nz/boimms).

If we have missed out any groups or impacts, please let us know at boimms@doc.govt.nz.

We want your feedback

On 20 April 2021, a notice was placed in the New Zealand Gazette for a proposed marine mammal sanctuary in Te Pēwhairangi (Bay of Islands).

There is a 28-day period to make a submission on the proposal. The consultation closes on 18 May 2021.

If you are whānau, hapū or iwi who exercise kaitiakitanga in the area, you should say so in your submission so that the Minister can give particular regard to your views.

To make a submission, please use the online portal:

If you are unable to make an electronic submission, you may make a written submission which includes the following information:

A written submission form is included at the end in this document for you to use, should you wish.

Written submissions should be mailed to or handed in by person to:
Proposed Te Pēwhairangi (Bay of Islands) marine mammal sanctuary Department of Conservation
34 Landing Road
Kerikeri 0230

Questions to consider in providing feedback on the proposal:

You can provide any feedback on the proposed marine mammal sanctuary that you would like. However, answering the following questions may assist you in making your submission:

Please note that any submission you make will become public information and that anyone can ask for copies of all submissions under the Official Information Act 1982.

Note that any decision that is made by The Department of Conservation Te Papa Atawhai to withhold information can be reviewed by the Ombudsman, who may require the information to be released.

What happens if a marine mammal sanctuary is established?

Under the legislation, marine mammal sanctuaries are administered by the Department of Conservation Te Papa Atawhai, whose management responsibilities include marking the boundaries (where necessary), informing the public of permitted and prohibited activities, undertaking biological monitoring, issuing scientific and special authority permits, and overseeing the enforcement provisions of the Marine Mammals Protection Act 1978 in relation to offences.

To date, discussions with the hapū–Department of Conservation Te Papa Atawhai kaitiaki roopu have suggested that:

Further work is underway between Treaty Partners to define the scope and key elements of potential co-management arrangements.

Have your say on a proposal to establish a marine mammal sanctuary in Te Pēwhairangi (Bay of Islands). Submissions closed 5 pm 18 May 2021.