2011
Whio numbers in Fiordland are greatly affected by predation by stoats. This report summarises the animal pest control and monitoring carried out in the Clinton, Arthur, and Cleddau Valleys, Fiordland, between July 2010 and June 2011.

Whio protection in Northern Fiordland National Park - Annual report 2010/2011 (PDF, 3528K)
(Note this is a large file and may take some time to download) 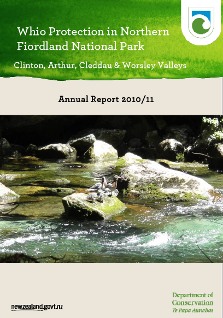 Good progress has been made towards outcome targets for whio/blue duck recovery this season in the Northern Fiordland Whio Protection Area in Fiordland National Park.

Seventy-seven whio ducklings were assumed to have fledged from the monitored area during the 2010/11 season, which is the highest number recorded since monitoring began.

There are 44 pairs of whio currently known from within the stoat trapped area at the end of the 2010/11 season, seven pairs higher than the previous season.

The goal of the Whio Recovery Group is to have at least 50 pairs within the trapped area by 2017, and with current progress it is likely that this goal will be achieved.