Feral goats are found in a wide range of habitats. They range from sea level to the alpine zone, living in introduced and native grasslands, scrub and forest. 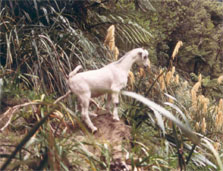 Size: Adult male goats in New Zealand stand around 60-80 cm at the shoulder and weigh an average of about 42 kg.

Females are smaller (shoulder height around 60-70 cm) and lighter (average around 30 kg) than males.

Colour: The coat is generally short haired with variable amounts of underfur. The hindquarters of both sexes, and the neck and shoulders of males may be shaggy.

Colour wise, they can be black, white or brown, or any combination of these. All males and some females are bearded as adults.

Horns: In New Zealand both sexes have horns. In females they are slender and curve upwards and backwards, with a clear space between the bases. In males the horns are larger and sweep up and backwards or up and outwards in an open spiral. The horns may touch at the base. The horns are not shed annually like antlers but are retained for the life of the animal.

Males are the largest sex, with clearly heavier forequarters, shaggier coats and larger horns. There is great variability in the colour, pattern and length of the coat, and in horn form and body size, related to the breed origins and nutritional condition of local populations.

Social behaviour: Goats are highly gregarious living in groups of mixed ages often containing both male and female animals. Being browsers goats will eat a wide range of plant material including shrubs, trees, grasses and weed species such as blackberry, brier rose and gorse.

During summer months goats tend to feed early morning and late afternoon with periods in the middle of the day spent resting whilst ruminating. In winter with its shorter days goats will be found eating throughout the day. Goats dislike wet conditions and in inclement weather will seek out shelter from rain and wind.

Reproduction: In New Zealand there is virtually year round mating, often peaking November-December, with most females breeding in their first year. When about to give birth, females move away from the group and it can take up to a year before integrating back with other goats occurs. A high percentage of twins are born.

Birthing: Can be any month.

Feral goats are found throughout New Zealand in both the North and South Islands. Concentrations of goats can be found in Taranaki, Hawke's Bay, Marlborough and Otago.

Goats occupy a wide range of habitat and can be found from sea level to the alpine zone, living in introduced and native grasslands, scrub and forest.

Because they are browsers, their preferred habitat is forest or scrub-covered upland containing areas of grassland. They are agile on steep crags and narrow ledges and can get to areas that deer can't reach. They like sunny sides of slopes, making use of open places close to the shelter of forest or scrub.

Some landowners keep goats to control weeds such as blackberry and gorse so always check boundaries of hunting areas.

Find a hunting block that has feral goats

You can use the hunting block search function to find hunting areas that have feral goats.

Search for a hunting block that has feral goats.

When caught out in the open, goats will on first shot, often stand and try to locate the source of the noise. If, however, they have been subjected to previous hunting pressure they may immediately depart from the area, usually in single file.A shout or a whistle will frequently cause them to stop and look back.

When hunted in a forest interior, the basic rules of stealth, observation, and wind direction that apply to deer should be followed. 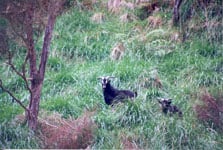 In New Zealand there is no seasonal restriction to hunting feral goats meaning generally they can be hunted throughout the year. There are however instances where restrictions apply for specific reasons and periods when hunting is favoured.

Winter is a good time to hunt goats as it is when: