Learn about the early exploration and formation of Westland Tai Poutini National Park. While you're in the area, walk the Historic Copland Track or visit one of the historic huts.

Early Maori settlements clung to the shores of Westland’s lakes and lagoons, where food was plentiful. However, in their travels up and down the coast, in search of Pounamu (greenstone), the Ngāi Tahu people also become familiar with the glaciers, peaks and forests of this area.

Gold in the hills and on the beaches 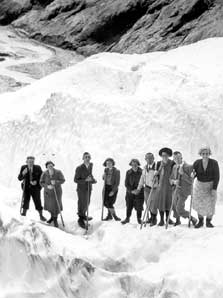 Gold brought thousands to the region – within the space of one year over 1864-65 at least 16,000 miners came to the rain-soaked wilderness to line their pockets with glittering gold. The first prospectors to venture into the region of the Park followed the rivers close to the inland ranges, but in the spring of 1865 they discovered a new gold rush on the previously unexploited black beach sands. Townships sprung up from the wilderness but the heights of the gold rush didn’t last long though and just 18 months after their incredibly rapid emergence, Ōkārito, Five Mile and Gillespies were virtual ghost towns.

When European surveyors and explorers spread word of the stunning attractions in the west, visitors overcame difficult access to see these things for themselves. By the start of the 1900s, so many tourists were visiting the glaciers that the Government began making annual grants to hoteliers for tracks and huts. The Graham family became the backbone of early tourism. Brothers Peter and Alec were outstanding guides, leading parties up onto the ice and into the mountains.  Under the expert care of the guides, hundreds of pioneer tourists experienced the thrill of walking on the glaciers, as well as further afield into the high mountains.

Formation of the National Park

Suggestions that the snowfields and glaciers of the region should be added to Aoraki/Mount Cook National Park united West Coast support for a national park in Westland. Representations were favourably received by the Government and as a prelude to the Westland provincial celebrations, the Executive Council met at Greymouth and proclaimed Westland National Park by Order in Council on 29 March 1960. 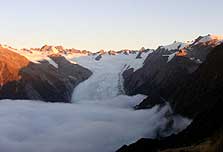 View from the top of Alex Knob 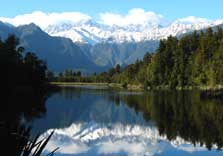 During the 1970’s the focus of conservation shifted to the lowland forests of the West Coast, and the southern part of Ōkārito State Forest and Waikukupa State Forest were added to the park in early 1982.

The park was further extended in 1983 to incorporate the complete catchment of the Upper Karangarua Valley, thus establishing more natural boundaries and securing an area with distinctive ecological and scenic values. Further additions were made to the park in 2002 (North Ōkārito and Saltwater State Forests) and 2010.

View the Journeys in National Parks: Westland / Aoraki documentary on NZ on Screen

Built to provide a tourist route across the Southern Alps Kā Tiritiri o te Moana, the Copland is still a popular tramping track today. The track links the West Coast with the Hermitage, an increasingly popular lodge at Aoraki Mount Cook.

Located in the Westland Tai Poutini National Park, the track is part of the Te Wahipounamu South West NZ World Heritage Area. The route quickly became a popular tourist trip and was one of the key tourist attractions that sustained the fledgling tourist industry in the area.

The Copland Track was built by the Tourist and Health Resorts Department. In 1901 New Zealand became the first country in the world to form a government department to develop and promote tourism.

Along with places such as Rotorua, the Chateau (Tongariro) and Milford, The Hermitage and the Southern Alps were becoming popular destinations with
the growing number of international tourists.

The Copland Track was built by the Tourist and Health Resorts Department to provide a tourist route across the Southern Alps linking the West Coast with the Hermitage, a popular lodge at Mt Cook. 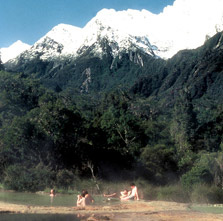 People soaking in the hot pools at
Welcome Flat

The track was constructed over several years from c1901-1913. Construction was slow and hampered by labour shortages. The harsh alpine weather made it impossible to work on the track during winter, so work was restricted to the summer months. Work was also delayed by the unstable nature of the landscape and high rainfall in the area.  This meant sections of track often had to be rebuilt due to damage from flooding, erosion and landslides.

At first the track was little more than a blazed line through the bush that had the tendency to become quickly overgrown. Eventually the track was widened and developed into a pack track.

There were no other tracks of this scale constructed solely for tourist use on the West Coast. The doggedness with which the completion of the track was pursued by the Government highlights the importance the Copland Track had in their plans for tourism in the South Island.

During the construction of the track, workers came across the natural hot pools at Welcome Flat. This was a great find - thermal attractions were proving popular with visitors and seen by the government as key to stimulating tourism. The hot pools, surrounded by snow clad mountain peaks, were prized by tired trampers.

The route quickly became a popular tourist trip and was one of the key tourist attractions that sustained the fledgling tourist industry in the area.

Originally erected in 1912 at Cape Defiance, this hut is now at the Franz Josef Visitor Centre.

Components were carried to Cape Defiance to provide a hut for glacier walkers and climbers. Site instability caused it to be re-sited in 1936, but access became more difficult as the site was eroded away the hut was in danger of falling onto the glacier. It was retrieved in 1978 for public display at the Franz Josef Visitor Centre.

It has historic themes of exploration, early tourism, and recreation.

One of the best known huts in the glacier region, used for many years by climbers from many parts of the world. Well documented and often photographed. Threatened by deterioration of structure and iron roof; blocked drains due to leaf litter.

Interpretation with displays by Friends of South Westland Mountaineering. 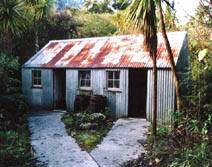 The sun shining down on Cape
Defiance Hut

A small iron and timber hut containing a stove, a table and forms, cupboards containing old supplies, bunks and assorted mountaineering artefacts such as skis and packs.

A rare example of an early mountain hut, in virtually unmodified condition.

Hendes Hut was built by Peter Hende for use as a smithy while he formed the wrought iron standards to support Hendes Gallery. Since then it has served as a shelter for walkers on the Roberts Track.

Hende was also responsible for the construction of Hende's Gallery adjacent to the hut. The structure, which was built in 1907, hangs off wrought iron bars driven into sheer rock walls, and was restored by the Department in 1996.

Continue as recreation, beside track to Roberts Point. Planned installation of interpretation panels and a brochure. The hut will be maintained to protect its historic fabric and minimise deterioration.

Other historic huts in the area

Almer Hut and Chancellor Hut are also historic huts in Westland Tai Poutini National Park. Both have been upgraded and are still available as accommodation for trampers.