Rescue operation saves gold relic on verge of collapse in West Coast bush. The 15 head stamper battery has the most stamps remaining on site in New Zealand.

The Kirwans Gold Mine deep in the West Coast bush operated from 1898-1906 and was in the rare position of being financially successful. The ore came from an open cast mine, transported 1.5km by aerial ropeways to the stamper battery, where the gold was recovered. 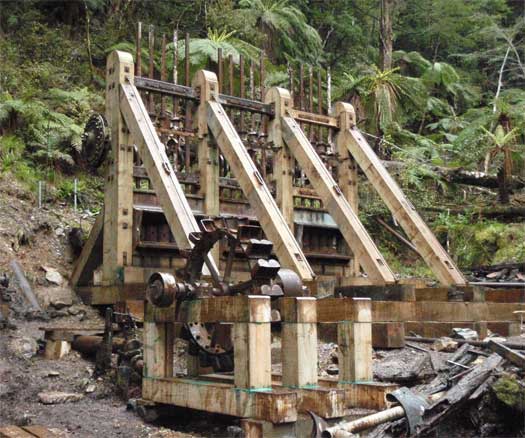 The 15 head stamper battery has the most stamps remaining on site in New Zealand. The open cast mine, tram and aerial ropeway routes are very rewarding to explore for those interested in industrial archaeology.  You can spend the night in Kirwans Hut, a great kiwi hut with commanding views and follow the old track beside the aerial ropeway down to the battery.

In 2010 DOC restored the battery which was in imminent danger of collapse. The specialist work involved sourcing very large timbers and using a specialist trade carpenter skilled in working with such sizes. Engineering issues also called for a high degree of expertise on site.

The battery lies on the proposed ‘Goldfields Journey’, a tramping/mountain biking trail being promoted by the Reefton community and DOC, linking historic gold mining sites between Waiuta and Capleston.

The battery and mining relics lie on Kirwans Pack Track, a two day tramp starting at Capleston, at the end of Boatmans Road, off the Reefton highway, 12km north of Reefton.

The walk up to Kirwans Hut is one of New Zealand's classic overnight tramps. A three day loop can also be made by going down the Waitahu Valley. There are incredible historic relics to be seen in this area.