The coastline is a mixture of wild, sandy beaches broken by boulders and reefs, alongside coastal nikau forest

Kahurangi Marine Reserve lies off the far northwest of the South Island. Walkers on the famous Heaphy Track in Kahurangi National Park can enjoy a stroll along its southern reach.

Find things to do and places to stay Kahurangi Marine Reserve

Kahurangi Marine Reserve protects the marine environment along 16 km of coastline and out to 5 km offshore between Wekakura Point and Crayfish Point.

The north of the reserve is a remote wilderness visited more by seals than humans. At 84 km2, it is one of the largest marine reserves in mainland New Zealand. 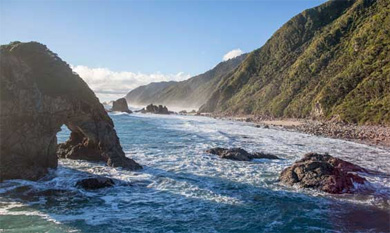 The coastline is a mixture of wild, honey coloured sandy beaches broken by boulders and reefs, bordering the coastal nikau forest of Kahurangi National Park. The marine reserve and national park combine to protect a full sequence of natural landscapes from the mountains to the ocean.

Driftwood adds a sculptural quality to the beaches, and supports small communities of animals such as earwigs, sandhoppers and spiders.

Rocky reefs and seastacks reach out from the boulder shores, supporting encrusting animals, invertebrates and inshore fish which thrive in the murky, churning water of this windward coast. 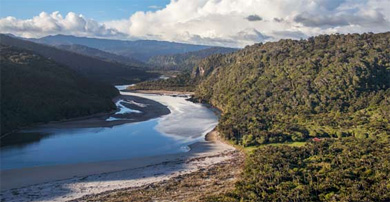 Fur seals/Kekeno often visit and rest at the Wekakura Point colony in the north of the reserve. It is also home to dozens of Hector’s dolphins.

The reserve reaches to depths of about 50 m. A seabed of mud and sand provides habitat for burrowing shellfish and coastal fish such as flounder, gurnard, snapper and sharks.

Visitors should be well prepared with food, water, warm clothing and wet weather gear. You should tell a responsible person where you are going and how long you expect to be away.

You must remain at least 20 m from seals – find out more about sharing our coasts with marine mammals.

Riding of quad bikes and horses is allowed within the reserve, providing there is minimal disturbance to the site and riders comply with legal requirements.

Stones (no more than 256 mm in intermediate diameter), shells, driftwood, sand and gravel can be collected by hand recreationally - but only as much as you can carry in one trip and with minimal disturbance to the site.

Pounamu can also be collected but only by members of Ngāi Tahu Whanui, or with the permission of Te Rūnanga o Ngāi Tahu.

Travel through expansive tussock downs, lush forests and nīkau palms to the roaring seas of the West Coast.