At a time when GPS was nothing more than a navigational fantasy, New Zealand became the most accurately located place on the globe. Visit the site where it happened. 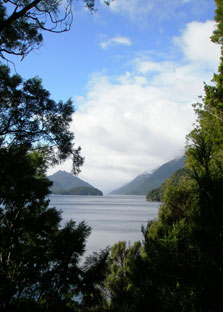 Astronomer’s Point is the site of a temporary observatory set up by William Wales, of the Board of Longitude, during Captain Cook’s second voyage in 1773. The observatory was established to fix the position of New Zealand.

On this voyage Cook was testing the accuracy of Larcum Kendall’s copy of John Harrison’s chronometer H4. As a consequence of the observations made by William Wales at this point New Zealand became the most accurately located place on the globe at that time.

In the autumn of 1773 Captain Cook sailed the Resolution into Tamatea/Dusky Sound and anchored in Pickersgill Harbour. After an arduous voyage through the Antarctic his crew needed rest and the ship required repairs.

About an acre of forest on Astronomer’s Point was cleared by Cook’s men. The stopover was used for re-provisioning and overhauling of the Resolution. A forge was set up for iron work, tents for sail makers and a workshop for the cooper. Cook set up a brewery using rimu and manuka leaves. It was hoped the resulting beer would aid in the prevention of scurvy amongst the crew.

After a five week stay, with the Resolution repaired and the crew restored, they set sail on 29 April 1773 and left via the Acheron Passage and Breaksea Sound.

Astronomer’s Point is located in Pickersgill Harbour, Tamatea/Dusky Sound. You can only reach this site by boat - either by visiting with a tourist operator or in your own sea transportation. This is one of the most visited historic heritage sites in Southland.

Beaglehole, J. (ed) (1961) The Voyage of the Resolution and Adventure 1772-1775. The Journals of Captain James Cook on his Voyages of Discovery (Cambridge University Press for the Hakluyt Society).

Sobel, D. (1996) Longitude : the true story of a lone genius who solved the greatest scientific problem of his time (Fourth Estate).