Taumoana Marine Reserve is situated next to Five Fingers Peninsula at the entrance of Tamatea/Dusky Sound. The reserve contains some of the only wave-exposed rocky reef habitat that is protected in Fiordland. 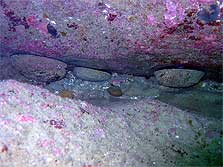 Taumoana marine reserve along side Five Fingers Peninsula at the entrance of Tamatea/Dusky Sound contains some of the only wave exposed rocky reef habitat that is protected in the Fiordland marine reserve network.

The reserve contains about 1,466 hectares of marine habitat and was one of eight marine reserves established in 2005 as part of the management measures proposed by the Fiordland Marine Guardians.

It includes Pigeon Island which late last century was home to one of New Zealand’s earliest conservationists, Richard Henry. This pioneer recognised that the numbers of flightless native birds were decreasing after the introduction of predators to New Zealand and spent 10 solo years based on the island, transporting kakapo and kiwi around Fiordland to pest free areas.

Exposure to the southwest means that ocean swells come into Dusky inlet hitting the southern sides of Parrot and Pigeon Islands, and the eastern side of Five Fingers Peninsula. The reserve contains shallow habitats and large stretches of estuarine habitat around Five Fingers Peninsula, Cormorant Cove and Facile Harbour. Due to the low lying hillsides around the reserve the whole region is exposed to direct sunlight.

Of all the habitats included in the Fiordland marine reserve network, this is the only one that potentially holds significant populations of paua and is more representative of habitats and species found in the outer fiords and coast.

Located on the wild and remote Fiordland coast, Tamatea/Dusky Sound is the focus of a cutting edge project to see it restored to one of the most intact ecosystems on Earth.

Richard Henry was the caretaker of New Zealand’s first island wildlife sanctuary in the 19th century.