Located in the Canterbury region

At Weka Pass Historic Reserve you can take a 40-minute walk to a large overhang shelter that features examples of early Māori rock art. 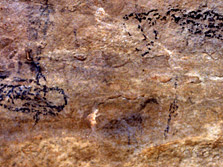 Māori first explored the Weka Pass area about 1000 years ago. The area was originally forested, and Māori would visit the area on their seasonal round for mahinga kai - food gathering. Birds were abundant, and included the now extinct moa and koreke / quail, as well as weka, kererū, kākā, kiwi in the forest, and a variety of waterfowl and freshwater fish in the streams.

Māori used the large overhanging limestone shelter as a temporary overnight camp. It was during these stays that they drew on the shelter wall, using charcoal from their fires, and red ochre (haematite) often called kōkōwai.

The subjects of their drawings were simple human figures, fish and dogs. Some drawings are more imaginative; others are little more than scribbles.

The arrival of Europeans

Early Pākehā visitors to North Canterbury - shepherds and farmers - also used the limestone overhang for shelter, for themselves and their stock.  They bought the drawings to the attention of scientific investigators, but not before many Pākehā visitors had added their own marks to the shelter walls and ceilings.

Julius Haast, director of the Canterbury Museum, made the first scientific investigation of the rock drawings in 1876. He commissioned artist T.S. Cousins to copy the main figures, and also carried out an investigation into the shelter floor. He discovered evidence left by Māori in the form of flaked stone tools, charcoal and fire stones as well as food remains - bones and shells.

In 1916, the principal original drawings were again copied, and in 1929, at the instigation of W.R.B. Oliver, director of the Dominion Museum, these were over painted in red and black house paint to make them more visible. In retrospect this has been seen as a tragedy, as it completely covered up the original figures, destroying forever their scientific and historic worth.

The drawings were studied and copied again in 1947, and then in 1968, a team from Canterbury Museum made an accurate tracing of the principle figures and also carried out a modern archaeological excavation of some areas of the floor. This work repeated the discoveries of Haast nearly a century earlier. It also confirmed that this rock art shelter, like all others in the South Island, had been occupied by Māori between 600-1000 years ago.

Relics left by early Pākehā were also found by investigators, including a clay pipe, a jews harp as well as coal for a traction engine.

Weka Pass Historic Reserve is about one hour drive from Christchurch, off state highway 7 towards Culverden.

There are two entry points to the walkway - The Star and Garter Hotel on S H 7 (parking available at hotel), or from Waikari township.

The walkway crosses private farmland, and is closed during lambing 1 August to 1 October.