Following the 2010 earthquake, the Pot kiln is closed but the Langdon kiln is open. Built in the late 1800s, the Staveley Lime Kilns are excellent examples of early New Zealand industry.

There are two kilns at the Staveley site and the Pot kiln is closed due to the 2010 Canterbury earthquake but the Langdon kiln is open.

The lime kilns of Staveley in Mid-Canterbury are fascinating examples of a New Zealand industry prior to the turn of the century. As well as being historically interesting, they are visually fascinating, with the rugged appearance of Norman Castle Towers in ruin. 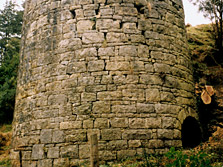 The 'pot kiln' near Staveley

The kilns are constructed from limestone quarried in the area, and as a result the kilns are an integral part of the local landscape.

The older of the two kilns, referred to as the 'pot kiln', is believed to have been built prior to 1890, although it is not known who built and operated it.

The second, 'Langdon kiln' was built in 1898 by William Langdon. In 1898, Langdon leased 45 hectares of land near Staveley where he had struck a coal seam, and he used this coal to fire the kiln. The kiln was worked by the Springburn Lime and Coal company and operated until about 1911.

The burnt lime produced at Staveley was used for agriculture. It may have also been used in the building industry for mortar, putty and whitewash. The lime for the older kiln was, at the outset, quarried by hand, using picks.

The heat while the lime was being burnt must have been intense, and with no proper ventilation in the tunnel, working conditions would have been difficult. There is a story told of a man falling into the Langdon kiln, and being burnt to death - all that remained was the nails from his boots.

Staveley township is 1 1/2 hours from Christchurch, inland from Ashburton. The road to the kilns is signposted from Staveley, from state highway 72.

To reach the kilns, an informal walking access crosses farmland from a carpark at the end of Boyds Road, behind the township of Staveley.

Follow the white markers to both kilns from the carpark.