Only the most determined played on this ice rink. First adventurers had to travel over a bumpy and windy gravel road. Then they had to cross the mighty Rangitata River. 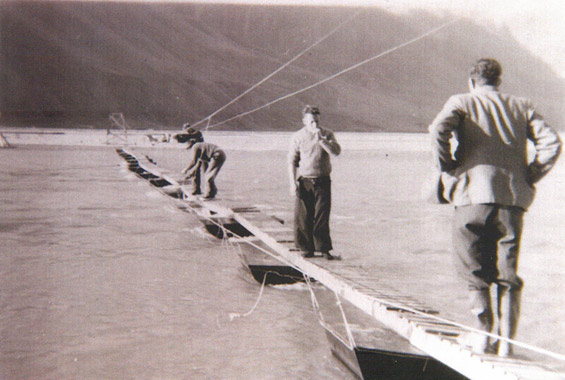 Crossing the Rangitata River on the pontoon bridge

When the ice rink first opened in 1933, a boat was used to ferry ice rink users back and forth across the river. Later on a pontoon bridge (a floating bridge) was used, and then a swing bridge which was repositioned each year after the floods. The journey to Mt Harper was not intended for the faint hearted!

The ice rink proved to be very popular, despite the difficult access. In 1939 Mt Harper ice rink recorded its biggest day of 3,000 guests! It was very popular for a weekend away in winter, not only with the locals, but also with people from Christchurch.

The ice rinks were built by hand by Mr Wyndham Barker, who had help from workers in the area, using ditches and banks. The site was perfect – being situated under the shadow of Mt Harper, there was a constant cover of ice in the winter. It was already a flat wetland area with a good supply of water from a nearby stream. Barker started work on the rink in the summer of 1931-32 and had completed the rink enough to open in 1933. Over the years the rink area was expanded to four rinks to include various ice-based sports.

The ice rinks were created using water diverted from a small stream and using this water to flood the area in successive freezing and flooding (100 mm of water every night) until the ice was 30 cm thick. After the first 100 mm of flood and freeze, Mr Barker would walk on the ice rinks and chop off the reeds and grasses poking through the ice, before he flooded again. 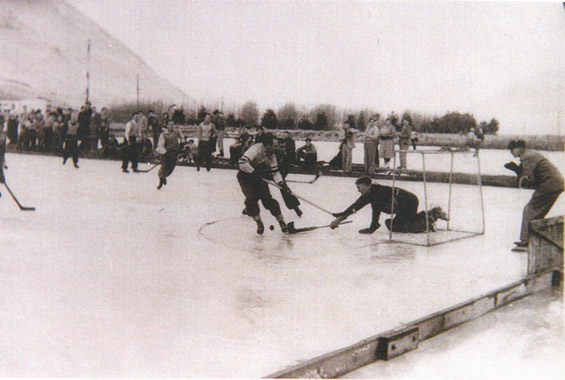 The ice rink was very popular in the 1930s and 1940s with the main activity being ice hockey. The Erewhon Cup for ice hockey was donated by Mr Barker in 1937 and was won that year by the Mt Harper Ice Hockey team. The cup is still contested for today. Figure skating and pleasure skating were also enjoyed by all. A Pelton water wheel generated power for the flood lights on the ice rink, and with a generator for back up, the ice rink was completely self-sufficient.

At one stage the Mt Harper ice rink was the largest flood-lit ice rink in the Southern Hemisphere.

The ice rink changed hands in 1946, when the Barkers retired and gave it to the People of Canterbury. The rink closed in the early 1950s due to the effects of World War 2, warmer winters and excessive flooding of the Rangitata. In the end it was the isolation of the rink which brought about its closure.

The Allen Family brought the rink in the 50s and continued to use it privately until the 1970s.

The land is now administered by the Department of Conservation. The ice rink is managed by DOC though the O Tu Wharekai Wetland Restoration Project to prevent further degradation by controlling invading weed.

Jackie Breen, from DOC’s Heritage team, tells us about the Kiwi love affair with ice skating at the Mt Harper ice rink.