Find out more about one of the most densely populated regions of New Zealand before European colonisation.

Oral histories, records of 18th century explorers and archaeological evidence provide proof that Taitokerau was one of the most densely populated regions of New Zealand before European colonisation. It was also the first area to be widely affected by western contact and it was here that the earliest Mission Stations and European industries were established.

Current research indicates that New Zealand was discovered about 900 - 1,000 years ago by voyagers from Eastern Polynesia. They were the descendants of sea-faring people who had already settled throughout most of the Pacific taking with them a range of cultivated plants and a few domesticated animals.

Northland, with its mild climate, numerous offshore islands and abundant seafoods, was New Zealand's nearest equivalent to their tropical homeland. Their appreciation of its advantages is supported by evidence from early coastal sites at the tip of Aupouri Peninsula, in estuaries and bays of the east coast and even on exposed west coast dunes.

These early settlements and campsites are characterised by midden containing bone and stone tools similar to those of Eastern Polynesia, and a broad range of seafood and bird remains including species that are now rare or extinct. Although widespread around the coast these sites are sparsely distributed in contrast to the densely concentrated evidence of later occupation.

The initial period of settlement was followed by rapid adaptation to the Northland environment which involved changes in agricultural practices, the invention of storage pits for food, and of new techniques for the exploitation of natural resources. While similarities with the language and customs of Eastern Polynesia were retained (and were noted by early European explorers*) these changes and developments resulted in the creation of a distinctive Maori culture.

Physical evidence of Maori occupation is visible throughout the region and in areas like the Taiamai Plains and the Oruru Valley where dramatically sculptured hill pa still dominate the landscape. These are the most spectacular historic features but the remains of unfortified villages or kainga, gardens, midden and stone workfloors also contain information about the environment, economy and material culture of the past. This archaeological evidence is not a substitute for oral history, it is complimentary to it; providing information on everyday activities too commonplace for inclusion in whakapapa or waiata.

Northland is essentially a maritime region with many deeply indented harbours and long stretches of sandy beaches. The density of early coastal settlement is emphasised wherever there have been intensive archaeological surveys. In these areas the recorded sites alone provide a detailed outline of the sea coast.

The widest variety of site types, indicating long term occupation, tend to be concentrated around sheltered harbours and inland regions with fertile soils. The exposed west coast beaches contain a similar density of sites but these are mainly midden and hangi associated with seafood collection and processing.

Midden deposits show that seafoods, including fish, shellfish and marine mammals, formed a substantial part of the diet, supplemented by bird and plant resources from the bush and fern covered hinterland.

Cultivated plants were equally important. Early records note that the full range of plants introduced from tropical Polynesia were cultivated in the North at the time of European contact. Indeed Northland was almost certainly the nursery where Maori agricultural techniques were developed. Today, feral taro is almost ubiquitous, there are several reports of 'wild' gourd plants and kumara can be over-wintered in the ground as far south as Whangārei.

Evidence of intensive agriculture, in the form of stone features, is particularly well preserved on the recent volcanic fields of the Taiamai Plains and in older volcanic areas like the Waipoua Valley. Extensive swamp gardens for taro cultivation have been identified in several parts of the Far North; the high density of sites around alluvial valleys indicate that these were also important agricultural areas, and channelled slope gardens are a distinctive feature of the heavier but fertile rendzina soils near the Kaipara and Whangārei Harbours. In addition to land naturally suited to Maori agriculture, many less fertile coastal areas contain evidence of modified soils where shell, sand and beach pebbles have been added to the heavy clay. This practice dates back to at least the 13th century in the Bay of Islands. 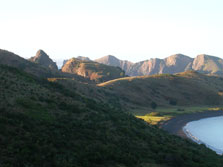 Other important resources which were readily available and widely exploited include flax, pingao and kuta reed for weaving, large forest trees like totara and kauri for canoes and building construction, and a variety of fine-grained rock for tool manufacture.

Local stone sources provided greywacke, gabbro, basalt, obsidian and chert, and additional valued materials like metasomatised argillite and nephrite were acquired from as far away as the South Island.

The profusion of pa, the extensive evidence of agriculture and the huge coastal middens are proof that the natural resources of Northland were esteemed and fought over for centuries. During this time there were changes to the environment and to the culture of those who modified it. But far more radical change was to follow the advent of Europeans.

*In 1770 Joseph Banks wrote "From the similarity of customs, the still greater of traditions and the almost identical sameness of language between these people and those of the islands in the South Sea, there remains little doubt that they came originally from the same source..."