Demography and distribution of Buller's albatrosses

August 2012
Read the final research report for the 2012 field season studying the demography and distribution of Buller's albatrosses.

Read the final research report for the 2012 field season studying the demography and distribution of Buller's albatrosses. 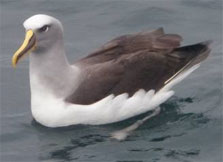 This report presents the results of demographic and tracking studies of Buller’s albatross Thalassarchebulleri at three study colonies at The Snares during 21-27 April 2012. Demographic studies at these colonies have been undertaken annually since 1992, and so this report incorporates some of these data in the current analysis.

Estimates of the numbers of breeding pairs, made by recording the contents of each nest, showed near-record totals over the period 1992-2012 in all three study colonies. A total of 296 birds that had been banded previously as breeding adults of unknown age were captured within the study colonies. A further 48 breeding birds were banded in the study colonies. These are assumed to be first-time breeders and this total represented 16.1% of the total number of birds captured, a proportion almost twice that recorded in any previous year. Consequently, the increase in the numbers of breeding pairs in all three study colonies is assumed to be a consequence of recruitment of young, inexperienced birds rather than increased survival of older, experienced birds. The oldest birds in the study colonies were banded as breeding birds of unknown age in 1977. Assuming a minimum age of first breeding of ten years, these birds were at least 45 years old in April 2012.

During the period 1992-2004 all chicks that survived to near-fledging were banded and their survival to return to the study colonies in subsequent years has been monitored. This year 121 of these birds were captured, with birds from cohorts banded from 1994 to 2004 being recaptured for the first time, showing the long term monitoring required to obtain reliable estimates of survival of such known-age birds. There is a strong male bias in the known-age birds recaptured, but some of this is explained by females being less likely than males to be recaptured. The average age of first breeding is 10-12 years and recruitment to the breeding population varies widely, so further years of recapture are required before the recruitment rates of all cohorts 1992-2004 can be estimated reliably.

Data from 35 retrieved geolocators have been processed and show that over a 12-month period Buller’s albatrosses are primarily distributed off the coasts of Chile and Peru, around the subantarctic islands, South Island and southern half of the North Island of New Zealand, and the eastern coast of Tasmania. In the Tasman Sea and Pacific Ocean between these land masses, Buller’s albatrosses generally occur from 40oS to 50oS. For the first time the kernel density distributions of Buller’s albatrosses obtained by geolocator tracking will allow an assessment of the timing and degree of overlap with various fisheries throughout the range of the birds.