January 2013
This report describes the population trend of Salvin's albatross at the Bounty Islands 1997-2011. 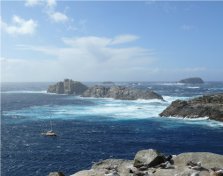 The Bounty Islands supports about 98.5% of the breeding population of the endemic Salvin’s Albatross (Thalassarche salvini), but the population had not been counted using methods that can be replicated. Therefore, until now there has been no means to determine population trends over time.

To estimate population trend and examine the accuracy of ground counts we completed a whole-island survey of Salvin’s Albatross breeding at Proclamation Island, Bounty Islands, New Zealand in November 1997. Repeat counts using the same methods completed in November 2004 and November 2011 suggested that the numbers of Salvin’s Albatross nests on Proclamation Island declined by 14% between 1997, and 2004, by 13% between 2004 and 2011, and overall by 30% between 1997 and 2011. Counts of nests on Depot Island decreased by 10% between 2004 and 2011.

The scale of change measured in the Salvin’s Albatross population on Proclamation and Depot Islands requires urgent investigation of the population and foraging biology of this nationally vulnerable New Zealand endemic species. We recommend that future ground counts be undertaken about 14 September (at the end of egg laying), so reducing any effects of prior breeding failure on estimated totals.

This report was commissioned by the Department of Conservation, Project POP2012-06

By Jacinda Amey and Paul Sagar