Bold bittern bucks the trend, strikes a pose in backyard

A bold young bittern has caused a stir in Waikato striking a pose in a Cambridge couple’s urban backyard.

Australasian bittern/matuku are rare in New Zealand. The wetland species’ population is estimated to be less than 1000 individuals, and they’re classified as ‘Threatened-Nationally Critical’ due to introduced predators and loss of habitat. That means they have the same threat classification as kākāpō and are more threatened than most species of kiwi. 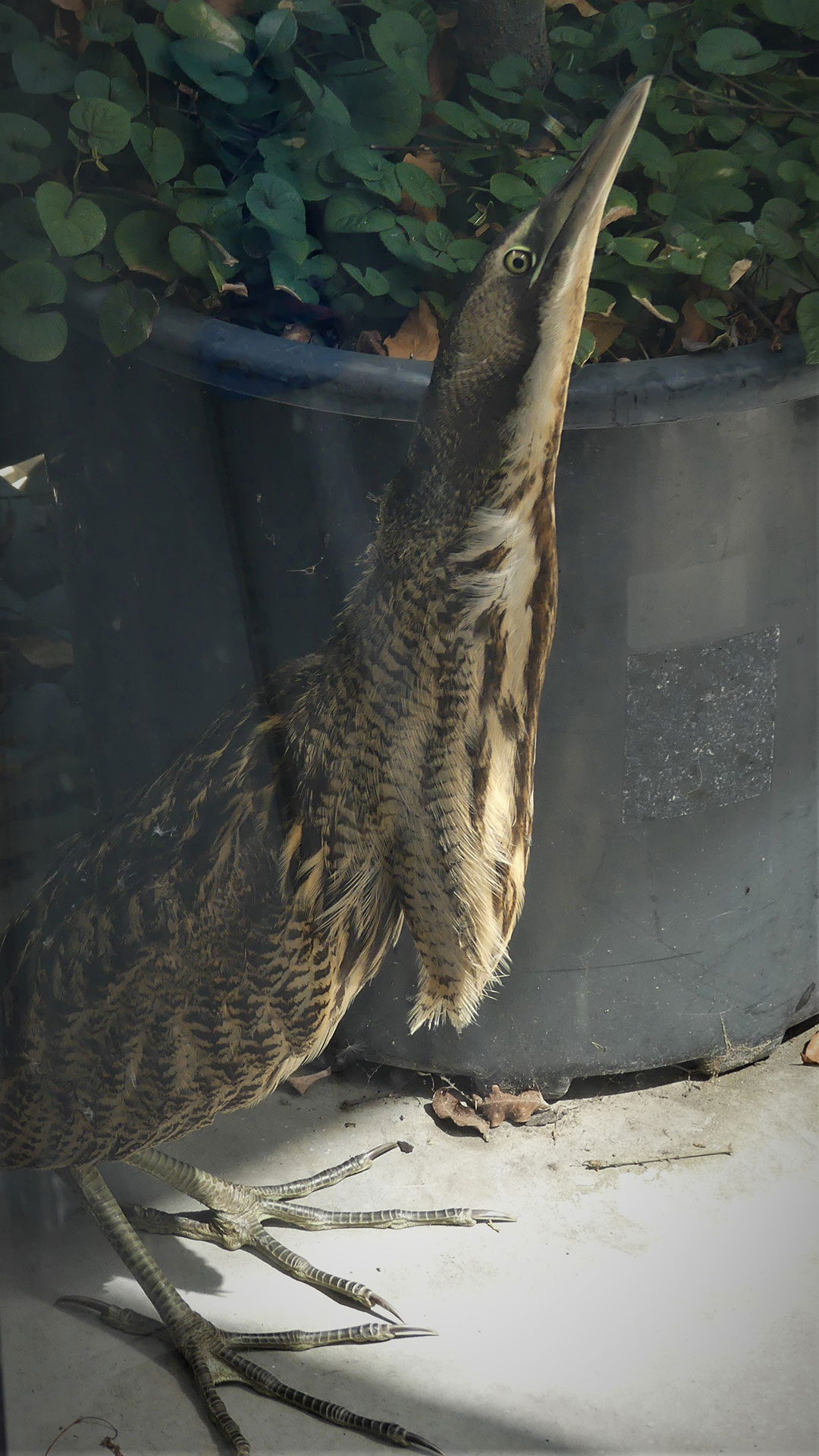 John and Jude Bowen arrived at their Cambridge home about 2.30 pm on Monday 17 January to find the unexpected avian visitor – a juvenile bittern – on their property.

Jude Bowen went into the garage of their St. Kilda home to put the washing on. Glancing out the window she saw an unfamiliar object lurking in the backyard and raced inside to inform husband John.

“Jude came back into the house and told me she found something outside,” says John. “I went into one of our bedrooms and opened the ranch slider to get a better look. And there it was.”

Jude took a few photos of the elusive, yet uncharacteristically bold, bittern, which appeared to be striking a pose for the camera.

“We were excited because we didn’t know what it was – I’d never seen anything like that before,” says John. “We watched it for a few moments because it had its neck straight up, in camouflage mode. We could see its eyes moving around, watching us.”

Once John had Googled the bird, he found out what it was.

“We realised it was a rare bird – an Australasian bittern!” says John. “I went onto the Department of Conservation website and it said to contact the local DOC office if you see one of these. I thought, ‘I’d better call!’ It created a lot of excitement in the Waikato District Office.”

“We continued to watch it for a few moments. Jude put some drinking water out as it was a hot day, but the bittern didn’t move,” says John. “We thought we’d better leave it alone and see what happens. We dropped the blinds down and checked on it again in a few minutes. It had vanished. We walked around the garden in case it was injured – but it had gone.”

There are two wetlands nearby the Bowen’s St Kilda subdivision home.

“We don’t know how or why it came here, but it’s certainly caused a big stir on the local Facebook page,” says John. “People are really excited!”

DOC Science Advisor Emma Williams, a wetland bird specialist, says the bittern is a juvenile, which could explain why it was so curious.

“So, much like human teenagers, they're a little prone to getting into trouble and turning up in places they shouldn't be,” she says.

“It's a great sign that breeding is happening in this area though - the locals should be very proud a bird as threatened as the kākāpō is interested in checking out what Cambridge has to offer.”

Emma says young bitterns that have previously come into urban areas have been severely underweight and suffering from starvation.

“It's a common problem with bitterns. They feed off small fish and eels, with the latter also being endangered. Also the chicks need areas of shallow, clear water with lots prey to learn to forage. Many of our waterways are severely degraded, with water being of poor quality and clarity, and channelled into deep inaccessible drains. This makes it difficult for bitterns, who rely of being able to see their prey, to feed.”

People can support and save bitterns by:

The endangered matuku inhabits wetlands throughout New Zealand. DOC is focusing on developing methods for surveying bittern systematically and for restoring wetlands .