The body of a juvenile dolphin, thought to be a Māui dolphin, has been found washed up on an Auckland beach. 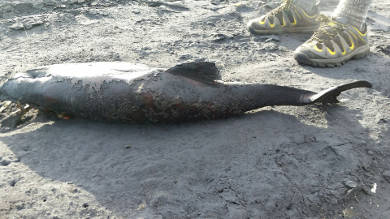 The dead dolphin was reported to DOC yesterday by a member of the public at Karioitahi Beach.

DOC Marine Species and Threats Manager Ian Angus says the dolphin appears to have been there for some time and is badly decomposed so it’s not likely that a necropsy will be able to determine cause of death. However, the dolphin will be sent to Massey University to be examined.

“If confirmed, it will be the third Māui dolphin death to be reported to DOC this year. The previous two were found to have died from natural causes,” he says.

A pregnant female dolphin was found dead near Te Akau, north of Raglan in October. Tests showed it died from blood poisoning resulting from complications while giving birth. Another Māui dolphin found dead at Port Waikato, was found to be a victim of shark predation.

“It’s tragic to have another juvenile dolphin die. We are hoping an examination may help us better understand why this has happened,” Ian Angus says.

“We urge the public to report any sightings or deaths as soon as possible. Every dead dolphin that can’t be necropsied is a lost opportunity to understand what is threatening the dolphins.”

With fewer than 100 left, Māui dolphins are critically endangered and are only found on the West Coast of the North Island.

This latest report means that since 2008 there have been seven recorded Māui dolphin deaths.

DOC is calling on the public to photograph and report any sightings of a Māui or Hector’s dolphins to the emergency hotline 0800 DOC HOT (0800 362 468).

The threat management plan is a planning framework to manage human-caused threats to Hector’s and Māui dolphins.