The number of rats in Russell Forest, located between Bay of Islands and Whangarei, have almost been wiped out and possum numbers have dropped to a fifth of what they were prior to the operation

Pest numbers at Rakaumangamanga/Cape Brett, located in the Bay of Islands have achieved similar results with no rats or mice detected and possum figures at a tenth of what they were pre aerial 1080.

“These results show outstanding success and prove the effectiveness of aerial 1080 to control pests in a large area over a short period of time. These low levels of pests have allowed the spring breeding of native bird life to have a higher chance of survival and the overall health of the forest will start to regenerate already. Native birds can produce more chicks, the ngahere can grow and provide kai to native birds, lizards and insects,” says Sue Reed-Thomas, Northern North Island Operation Director.

“Reducing the pests to such a low level is just the beginning of the work – DOC are committed to working with hapū and communities to keep these pest numbers low and bring back the kūkupa, kiwi abundance and bring back other native species to the forests.”

“We will continue to support the work of the Russell Roopu to implement the 20 year forest health plan, with the long-term goal of forest restoration. The use of aerial 1080 to restore the forest is the first step in the plan.” 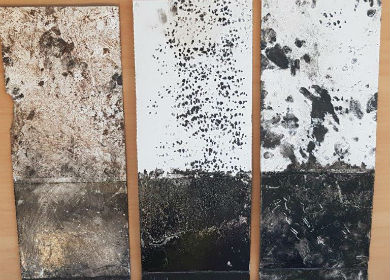 Pre operation tracking tunnels from Russell Forest in August 2018 show (left to right) pigs, rats and possums have been in the forest.
Image: DOC

Tracking tunnels are standard DOC practice to measure rat, mice and stoat numbers in the forests. Tunnels with ink pads and bait (like peanut butter) are placed in predetermined lines at 50 m intervals both before and after the 1080 operation. 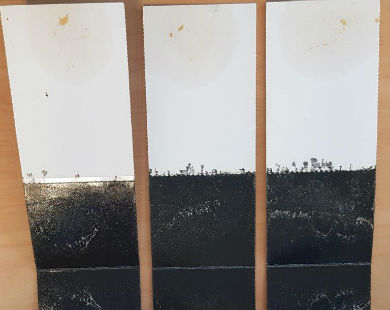 Post operation tracking tunnel from Russell Forest in October 2018 – all tunnels have no footprints, bites or licks, indicating no pest presence.
Image: DOC

Staff then analyse the footprints in the tunnels to determine the presence of rodents. In Russell Forest DOC staff put out 160 tracking tunnels before and after the aerial 1080 operation. Before, 76% of the 160 tunnels had pest interference. After, only one out of 160 tunnels had rat footprints.

Possum presence is measured through wax tags which are placed 20 m apart and when possums chew the tags it indicates their presence.

Russell Forest is the largest forest ecosystem in eastern Northland and is home to a number of threatened animals and plant species, including the king fern, forest gecko, kauri snail and longfin eel. Kūkupa were once abundant but are now scarce, while kākāriki and kākā are probably locally extinct, from sustained attacked from introduced animals – possums, stoats, weasels, rats and feral cats.

The ngahere (forest) of Rakaumangamanga/Cape Brett is some of the, little remaining, coastal broadleaf forest in Northland and home to threatened species including kiwi, reef heron and kūkupa.

DOC acknowledges the support of Rawhiti 3B2 Ahu whenua Trust at Rakaumangamanga/Cape Brett and the Russell Forest Roopu at Russell Forest to deliver these aerial 1080 operations.