DOC ranger Colin with the web cam chick and parent

Tūmanako, the northern royal albatross/toroa and star of 'Royal Cam', has left Pukekura/Taiaroa Head near Dunedin, to start a new life at sea. 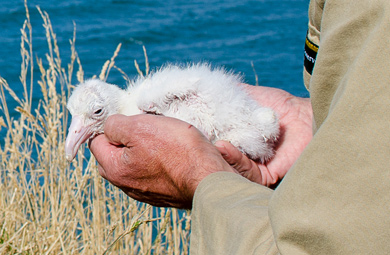 Tūmanako, not long after hatching

There are now just two chicks remaining at the colony – one of them being Toroa's chick (Toroa was the 500th chick to hatch at the colony).

"It will be 4-10 years before Tūmanako returns, hopefully to breed and raise his own chick," says DOC Threatened Species Ambassador Nicola Toki.

"Who knows what adventures and challenges Tūmanako will face over the next few years. Threats he may face include natural predators such as orca and sharks, plastic pollution, some fishing practices and changes in habitat and climate."

"However, from rocky beginnings, this chick has developed well, last weighed in at a healthy 9.5 kg and, thanks to the fantastic work of DOC's rangers and the staff at the Royal Albatross Centre, has been given the best possible start in life to enable a safe return to these shores."

Manager of Operations Taiaroa Head for Otago Peninsula Trust, Hoani Langsbury, said "while people are sad to see the albatross chicks fledge it's a huge achievement to successfully raise 23 chicks and contribute to the growth of the colony. We'll miss them, but look forward to watching the 2017/18 breeding season which will start any day soon."

It's the second year running 'Royal Cam' has been streaming live from a nest in the northern royal albatross colony on the Otago Peninsula. Since Royal Cam launched in January 2016 it has received almost 2 million views in over 200 countries. The live stream will continue to run, as the adult birds return and prepare their nests for next year.

"To give our Royal Cam team a break in between seasons, we won't be answering any questions for the next few months," says Ms Toki.

"As a thank you to all the dedicated Royal Cam fans, DOC has put a little video together of Tūmanako's journey from egg to leaving the nest."

Watch the video showing highlights of Tūmanako's life so far.