Trainee Conservation Dog cuts his teeth in the capital

Flint and Richard started work in mid-October to strengthen DOC’s island biosecurity programme and boost its presence at ferry terminals and marinas.

The DOC-managed Conservation Dogs Programme – supported by Kiwibank – is a squad of canines and their handlers, trained to carry out surveillance of our pest-free islands and mainland sanctuaries. They play a major role in protecting species such as kākāpō, kiwi, whio, pāteke and takahē from predation by sniffing out potential invaders, such as rodents, stoats and even argentine ants. 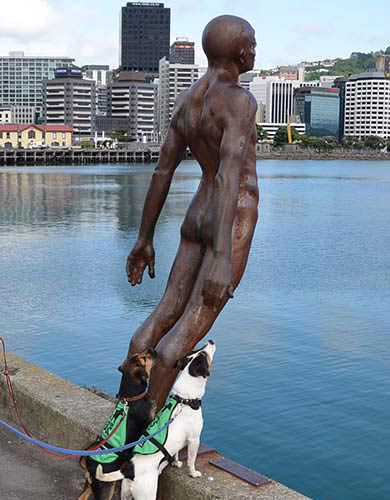 “He received his interim certification – kind of like a restricted drivers licence for a pest detection dog – and had his first job checking visitors’ bags destined for Mana island.

“He passed his test with flying colours and will complete his full certification in the next month.”

Flint’s speciality is rats and mice.

“We are still training every day to embed his ability to indicate rodents only and not get distracted by other species.”

Richard is also training another Conservation Dog – five-month old puppy Kowhai; one of four pups which the Kiwibank partnership has funded.

“She’s got a long way to go but will eventually be a mustelid dog, focused on stoats, weasels and ferrets. Together, we’ll be able to help protect Wellington’s pest-free sites – like Mana, Kapiti and Matiu Somes Islands – from potential incursions.”