More than a hundred polished sperm whale teeth, known as tabua, that came to New Zealand from Fiji have been returned. 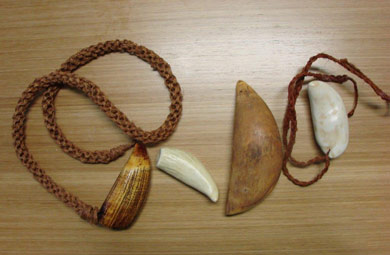 Four of the 146 tabua returned to Fiji by DOC

Tabua are an important cultural item in Fiji. They can't be moved across international borders without permission because they come from sperm whales, which are an internationally protected species.

Sperm whales are protected by the Convention on International Trade in Endangered Species of Wild Fauna and Flora (CITES). This is a legally binding agreement between more than 180 countries. The aim of CITES is to ensure international trade in specimens of wild animals and plants does not threaten their survival.

New Zealand joined CITES in 1989 and passed the Trade in Endangered Species Act 1989. The legislation requires anyone bringing an item made from a protected species - like a tabua - into New Zealand from overseas, to have a CITES permit.

"Over the years, people travelling from Fiji have arrived at the New Zealand border with a tabua, but without the CITES permit needed to bring it into the country. This has meant they've had to hand over the tabua to DOC. We've kept the seized tabua in secure storage," says DOC Director-General Lou Sanson.

"Following discussions with the Fiji Department of Environment we've now returned 146 tabua to Fiji. Tabua are a significant taonga in Fiji and we're pleased to be able to return them to their rightful home," says Lou Sanson.

Tabua are considered by Fijians as a kavakaturanga or a 'chiefly thing'. They're not worn but are presented at important ceremonies, including weddings, births and funerals.

"This is a significant event for Fiji as tabua play a very significant role in traditional Fijian society. They hold a ceremonial role in our country. They are very few new tabua in Fiji. This is because in modern times we can only obtain these teeth when a sperm whale dies after stranding on our coast," says Joshua Wycliffe.

"My Ministry use tabua, for instance when we engage with communities as part of our conservation work. Obviously, the return of these tabua will help us when we're developing new conservation projects."

"My Ministry manages the CITES system in Fiji. So, when we engage with communities we remind them they need to have the correct CITES permit if they're taking their tabua to another country," says Joshua Wycliffe.

Government agencies manage the CITES permit system in more than 180 countries. It enables these agencies to regulate legal and sustainable wildlife trade and to catch and prosecute people attempting to illegally buy and sell items made from protected animal and plant species.

"The use of the tabua in Fiji for cultural purposes, the survival of the sperm whale in the wild and CITES are all compatible," says CITES Secretary-General John Scanlon.

"By working together with a sense of common purpose, we see culture, people and wildlife converge in a way that lifts our spirits."

"We applaud the efforts of the CITES Management Authorities of Fiji and New Zealand to deal with these issues fully in accordance with CITES and in such a culturally sensitive manner," says John Scanlon.

New Zealand High Commissioner to Fiji Mark Ramsden handed the tabua, returned from New Zealand, to the Prime Minister of Fiji Hon. Josaia Voreqe Bainimarama at a ceremony in Nadi on Monday May 29.

The handover will be followed by a workshop involving CITES personnel from 16 countries in the Oceania region, which will be opened by the CITES Secretary-General John Scanlon.