The latest Porirua suburb to join the predator-free movement will launch this Saturday 29 July, with free rat traps to give away. 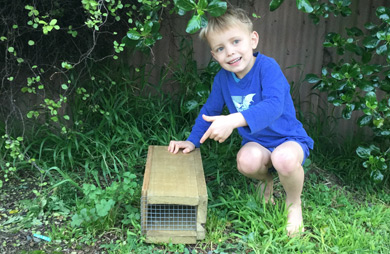 Titahi Bay joins five other Porirua suburbs which have converted over five hundred residents to rat-killers over the past year, contributing to Predator Free New Zealand by 2050.

Dave Sutherland, a local teacher, decided to kick off the Titahi Bay trapping group after seeing the surrounding suburbs get onboard.

"People love Titahi Bay because it has both natural beauty and a great connection between neighbours. Pest Free Titahi Bay is an idea that can improve them both. By working together we can bring back the birds."

With support from local DOC and Porirua City Council staff, community organisers supply traps and advice to their neighbours to control pests in their backyards. Numbers of pests caught are recorded centrally and residents are rewarded by seeing declining numbers of rats around their properties.

"If we can protect the entire Porirua harbour edge from pests, we will see native birds and lizards returning to gardens, and being safe to spill-over from refuges like Pauatahanui Wildlife Reserve.

"If anyone in Paremata, Whitby and Pauatahanui is keen to plug these gaps, get in touch so we can help get you started – pestfreeplim@gmail.com "

Up to 70 households will receive a free rat trap and box, with the option to make a $20 donation to cover costs. More information on the Pest Free Titahi Bay Facebook page.