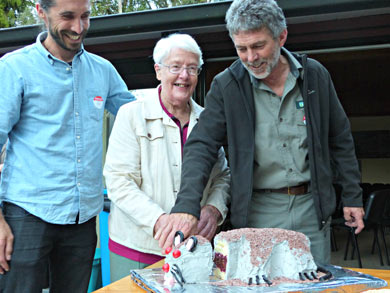 Recently more than 50 volunteers from around the Taupo District gathered together to talk all things predator trapping.

The celebration, hosted by the Department of Conservation (DOC), invited the 12 active predator trapping groups from around Lake Taupo to hear Goodnature co-founder Stu Barr talk about the origins of the company, and update the groups on the latest technological advances.

After introductions by each group, Stu stood up and said it brought a tear to his eye to see so many community volunteers together to talk predator trapping, “I couldn’t have imagined this many volunteers when we started up over ten years ago”.

Since then, Goodnature have revolutionised the fight against the predators harming our birds – possums, rats and stoats – with the design and manufacture of automatic traps that humanely kill pest animals and then reset themselves. Instead of volunteer hours spent re-setting single-kill traps, they can now cover a wider area with traps that can take out up to 24 rats or stoats without needing to be checked for six months.

Currently DOC estimates in the Taupo district up to 80 volunteers work on over 15 predator trapping projects contributing nearly a thousand work days every year – a huge conservation effort to restore balance to local biodiversity.

Community trapping began in 2002 at Pukawa at the southern end of Lake Taupo, with local resident Jean Stanley – whose passion for protecting native flora and fauna has spread like wild fire around the lake. Her encouragement inspired projects in Omori, Kuratau and Whareroa – and has since swept north with the establishment of the Kinloch community predator control group only last year.

It was only appropriate then that Jean cut the celebratory “Rat Cake” with Stu Barr and DOC Central Plateau Manager Dave Lumley. After cutting the head off the rat, and seeing the raspberry jam centre ooze out Dave commented “although a slightly gruesome sense of humour from our community rangers, this is a fitting way to acknowledge the immense effort within the district to bring back the birds by reducing the impacts of introduced predators.”

With the announcement of Predator Free 2050 last year, the passion in the Taupo district is a step in the right direction. Community group Greening Taupo president Paul Green said he is bolstered by the achievements of the southern trapping programmes and hopes to see the same appetite for action in Taupō itself. To encourage action, Greening Taupo is facilitating a meeting with support from Wairakei Sanctuary and DOC, Thursday 18 May 5.30-7pm at the Wairakei Golf + Sanctuary, Wairakei Drive.