Clean your gear to keep didymo out of Milford rivers

DOC and Fish & Game are urging trampers and river users on the Milford Track to clean their gear before entering the area to prevent didymo being introduced to the Clinton River.

The Milford Track rivers (the Clinton and the Arthur rivers) and their tributaries have extra regulations under the Biosecurity Act to prevent didymo being introduced there. These rivers have high ecological values and are important whio/blue duck habitats. All motorised and non-motorised watercraft are prohibited in the Clinton River and its tributaries to stop the spread of didymo upstream.

Cleaning gear is one important step to keeping the pest algae out of the Clinton River, which runs alongside the track. DOC and Fish & Game have installed an extra cleaning station on the track just past the Clinton Hut due to concerns that a raft recently entered the catchment. 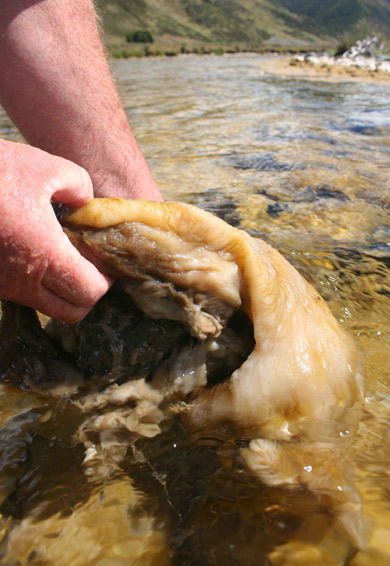 While didymo is in Lake Te Anau and Lake Manapouri, the majority of western Fiordland is still didymo-free. Visitors to the area need to take responsibility for helping keep it that way.

DOC freshwater ranger Chloe Corne said DOC and Fish & Game test the Clinton and Arthur rivers annually and have not found any sign of didymo so far.

"We're hoping it isn't in there and want to make sure it doesn't get there," Chloe said.

Didymo only needs a few cells to establish itself in a new area and is easily transferred on wet or damp gear that has been in contact with affected areas.

"If didymo took hold in the Clinton River it would be a massive blow after the huge effort to keep Milford Track rivers free from didymo since its introduction to New Zealand in 2004," Chloe said.

DOC and Fish & Game are asking Clinton River users to take a precautionary approach and clean their gear before and after entering the area and in between each waterway they visit. They are asking people who have been near the river to use the cleaning station installed on the track.

Chloe said it was important people were familiar with rules around activities within Fiordland National Park.

"Users can check the DOC website or check with the DOC Te Anau visitor centre if they're unsure of the rules."

Fish & Game is also asking all park users to help protect the waterways they enjoy using.

"Anglers are all now familiar with the requirement to clean their gear at an approved cleaning station and obtain their clean gear certificate before fishing in Fiordland," Fish & Game ranger Hamish Angus said.

"However, as time has gone on since the introduction of didymo, complacency has become one of our biggest risks, especially when it's present in the lake and it may only take lake-wet tramping boots to transfer it."

"The spread of didymo throughout South Island rivers highlights just how easily it is transferred. Its virtual absence from Fiordland shows that our communities' efforts have so far been successful, but it only takes one mistake to undo all that work," Hamish added.

Biosecurity helps to prevent damage caused by unwanted organisms. These include animal pests, weeds, didymo, and diseases like kauri dieback.