A photo of a young green gecko has helped confirm that a breeding population has established on Maitu Somes Island.

A photo of a young green gecko has helped confirm that a breeding population has established on Matiu Somes Island.

Island Ranger Jo Greenman was at home doing the dishes when she spotted the rare gecko out on the lawn, ‘It was being attacked by a blackbird but luckily managed to escape.’

Between 2006 and 2013 more than 90 green gecko were re-introduced to the Island, but there have been few confirmed sightings since then. ‘Green geckos are notoriously difficult to see – they live in the tree tops, and hunt moths and flies at night. This is a great start to 2015,’ said Ms Greenman. 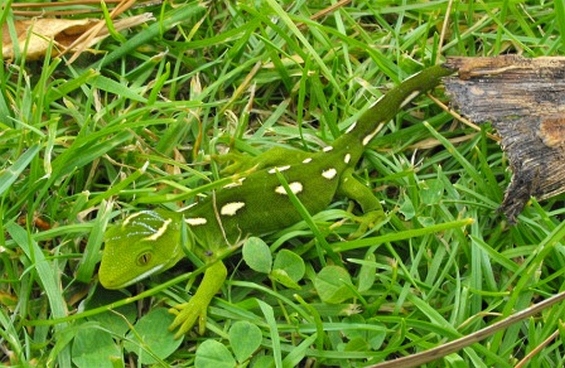 All geckos released on the mammalian predator-free island were photographed and their unique markings recorded. DOC Senior Ranger Brent Tandy said this gecko was the next generation, ‘This young female is not in our records which means it was born on the island. This sighting indicates we have a breeding population establishing on Matiu Somes.’

Chairman of the Harbour Islands Kaitiaki Board Mark Te One said, ‘It is fantastic to hear the green gecko population is increasing, they are a taonga species, and a lot of people were involved in their re-introduction to Matiu.’

While visitors to Matiu Somes are unlikely to see the elusive canopy dwellers, green gecko populations are also found in Wellington island sanctuaries such as Kapiti, and Mana Islands, and mainland island Zealandia. A captive population of green gecko at Zealandia was one of the original breeding groups for the gecko which were re-introduced to Matiu Somes.

All New Zealand geckos are fully protected, meaning that they may only be handled, collected or kept in captivity under permit. It is illegal to deliberately harm them.

In 2013 New Zealand’s green geckos were given greater protection against smuggling following a decision at the Convention on International Trade in Endangered Species (CITES) conference in Bangkok.

The export of wild geckos from New Zealand for trade on the overseas market without the proper authority is completely illegal. In recent years green geckos has been targeted by collectors fascinated by their bright colour and striking markings.  Now authorities in NZ and overseas can conduct enquiries, investigate illegal activities and make seizures under international law for people found to be illegally trading in geckos.