War on wilding conifers in the Mackenzie

As part of its war on wilding conifers in the Mackenzie Basin, the Department of Conservation is undertaking extensive pine and larch.

As part of its war on wilding conifers in the Mackenzie Basin, the Department of Conservation (DOC) is undertaking extensive pine and larch control this week including trialling a new formula of helicopter boom foliar spray. A view of the wilding conifer problem in the Mackenzie Basin

Peter Willemse and DOC’s Biodiversity Threats Technical Advisor Pete Raal have been working together for six years to develop an effective method of dealing with the overwhelming issue of dense wilding pine infestations in the region.

“Sadly, the spectacular open grasslands of the Mackenzie are especially vulnerable to invasion from conifers,” says Peter Willemse.

The pair are carrying out helicopter boom-spraying using a herbicide blend dubbed ‘Armageddon’. Last year trials using Armageddon on Pinus contorta proved fatal to 98% of the trees. DOC has high hopes it will have the same impact on Pinus mugo which also threatens the Mackenzie’s distinctive ecology.

And an added benefit of using this control method, where the dead trees are left standing, is that the pines do not re-establish in the shady conditions beneath the canopy but native plants do.

“We’ve discovered that as well as removing the pine tree threat to this area another positive consequence of using this technique has been that there is low pine re-generation because they are shade intolerant, but our native plants do really well in the filtered shade environment under the sprayed trees,” says Peter Willemse. 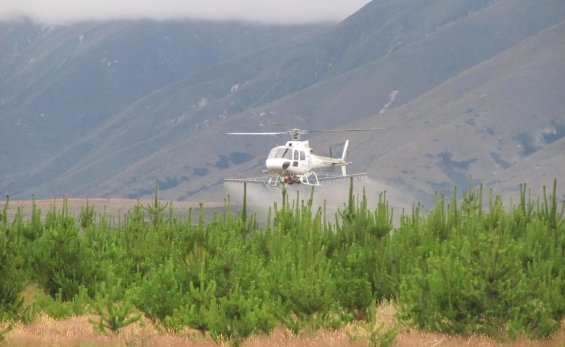 The DOC team is spraying areas of pines in Diadem Creek (this is a threat to Ahuriri Conservation Park) and larch in Jollie valley, adjacent to Aoraki/Mount Cook National Park, two areas where pest trees have established a stronghold. They are also carrying out trial spraying on pines near Lake Pukaki.

“Time is not on our side as the cost of controlling wilding conifers escalates over the years,” says Peter Willemse.

“However, they are a pest problem that New Zealand is able to overcome. We have developed good control methods which, combined with strong community support, should ultimately allow us to win the war against them.”