An old anchor briefly discovered on Moutohora Whale Island may have been part of historic sulphur mining activities.

An old anchor briefly discovered on Moutohora Whale Island may have been part of historic sulphur mining activities.

The anchor was found near the low tide line on the beach at Sulphur Bay during a visit by one of the permitted tourist operators. 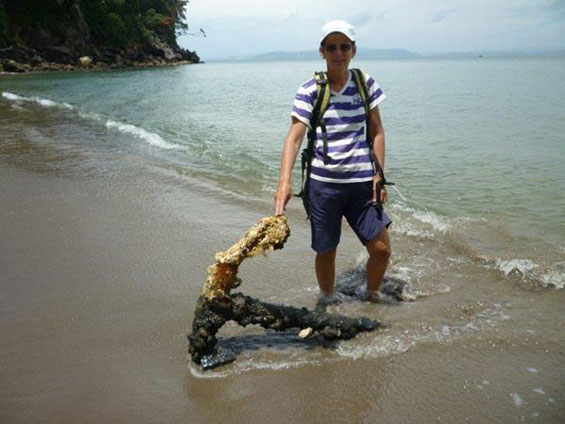 Jenny Tait of White Island Tours who was leading the tourists on the island said the anchor was of a type that went out of use before 1900 so was obviously very old.

Mrs Tait photographed the anchor and described its location to other White Island Tours staff so it could be shown to other tour groups. By the following day, however, the anchor was unable to be located.

Department of Conservation Eastern Bay of Plenty Partnership Manager Steve Brightwell said the anchor could have been part of the former sulphur mining activities, potentially came from a shipwreck or was simply lost from a ship at some stage.

He said advice from the Department’s archaeologists was that the anchor was best left fully submerged in the sea as it would soon crumble away if exposed to the air.

“Hopefully, it’s just disappeared back into the tide from where it came – that way it will be safe from decomposition and some research can be undertaken to find out if it’s an important part of the island’s history.”

Mr Brightwell said if it turned out to be an important artefact, rather than just a lost anchor, a conservation plan could be developed for it should it appear again.