An injured bittern found in the central North Island has provided the opportunity to gather important information on the species.

Wingspan National Bird of Prey Centre recently played host to a species even more threatened than the raptors they usually work with.

A Rotorua man who was fishing in the Atiamuri area stumbled across an injured bittern and took the bird to Wingspan to receive care. 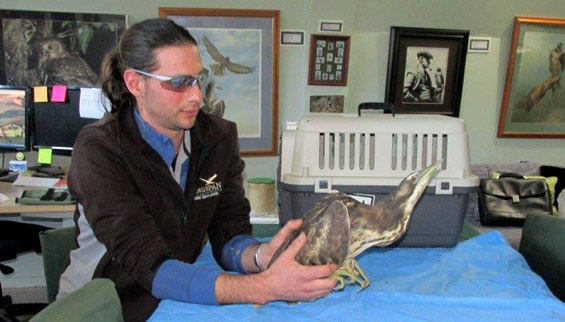 Health checks being carried out on a bittern, Wingspan National Bird of Prey Centre

Wingspan director Debbie Stewart said she was compelled to help the swamp bird, even though it was not a bird of prey, when the bird was bought into Wingspan last Friday.

Less than 1,000 bittern are thought to exist and the birds are rarely seen.

"Once a bit more is known about the bird's condition, it will be fitted with a transmitter and released back into the area it was found", says DOC ranger and Massey University PhD student Emma Williams.

"Bittern are extremely cryptic and very little information on the species is available. We think the injured bird may be a female. If it is, this will be the first time a female from this district has been fitted with a transmitter. This is a really exciting opportunity to learn more about this unique wetland bird", explains Emma.

The bird has now been taken to Hamilton where a wildlife restoration professional with experience in working with bittern will carry out blood tests and x-rays. Pending the results of the tests, it is hoped the bittern will be released back into its natural environment on Thursday.

Habitat destruction through the drainage of wetlands has led to population decline for bittern. They lay their eggs at ground level making the eggs susceptible to predation from rats and mustelids.

The endangered matuku inhabits wetlands throughout New Zealand. DOC is focusing on developing methods for surveying bittern systematically and for restoring wetlands .