Kōkako in Mokaihaha Ecological Area are set to flourish this year with a reduced number of predators following a pest control operation.

A population of threatened North Island kōkako in the Mokaihaha Ecological Area now has a fighting chance of survival following an aerial pest control operation that decimated their main predators, rats and possums. 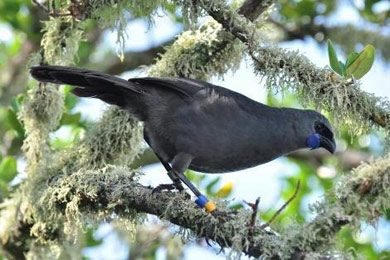 Forty-four pairs of kōkako were detected living in the 2,100-hectare Mokaihaha and surrounding bush areas in May 2015, making this an important kōkako site within New Zealand.

"Following the aerial application of 1080 baits in August, the residual trap catch index (possum population indicator) has fallen from 12.3% to just 1.1%, ensuring favourable breeding conditions for kōkako and other bird species for the next several seasons," said Department of Conservation (DOC) senior ranger, Erin Patterson.

"Rat monitoring prior to the pest control operation had 30% of tunnels showing evidence of rats. Seven weeks after the operation, no sign of rats was found in the operational area. Rat population data is gathered using bait inside tracking tunnels. The bait lures the pests inside and their footprints are tracked using inked cards," Erin Patterson explained.

"We expect the kōkako population will flourish this year because the pest control operation achieved large reductions in the number of possums, rats and stoats that prey on eggs, chicks and even adult birds on the nest."

Erin Patterson said numerous possum trapping permits for the area have been allocated over the years but ground-based control is not enough to knock back predator numbers of this scale.

"Kōkako are extremely susceptible to predation by introduced mammals, and we aim for less than 2% rats and possums to ensure good breeding success.

"Now that the pests have been knocked back, we’re working hard to maintain the low numbers with a combination of ground-based and aerial baiting to ensure the long term survival of our local treasure."

Other native birds including kākā, whiteheads, riflemen, and bellbirds will also benefit from the reduction in predators; and the forest canopy will have a chance to recover from browsing by possums.