One of the world’s top 10 invasive species, Argentine ants pose a serious threat to New Zealand's biodiversity. Find out how to spot and remove them from your home.

Found in: Warm, dry elevated sites in urban and natural areas, often in soil
Control: Fipronil based baits and pesticides

Argentine ants are one of the world’s most problematic ant species. They are aggressive and territorial, so while they are not poisonous, they can bite people.

Unlike other ants, Argentine ant nests cooperate with each other and can build ‘super-colonies’. They form these by connecting their nests through cooperation between worker ants, enabling a high density of nests which can grow to huge numbers.

The colonies have massive appetites, making them more aggressive and destructive because of their sheer numbers. 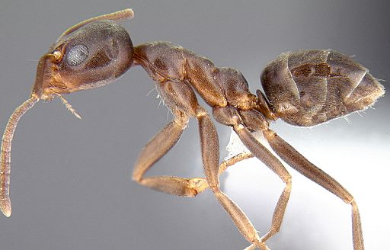 We know of Argentine ants in many parts of Auckland, Northland, Waikato, Bay of Plenty, Hawke's Bay, Wellington, Nelson and Christchurch.

The best way to tell them from other ant species is by their colour and trails. They are:

How do they threaten native species?

Besides being a major household and garden pest, Argentine ants pose a serious threat to our natural areas and biodiversity because of their aggressiveness and appetite.

During spring and summer, when nests are expanding, they have an insatiable appetite for protein and sweet foods such as honeydew and nectar. Because their diet spans all food types from insects to nectar, they take food sources away from:

How to remove Argentine ants

A difficult pest to control, fipronil based baits and pesticides are often best for these ants outside the house. For larger super-colonies, you may need to coordinate a community response.

Because Argentine ants link their nests within supercolonies, they can extend hundreds of metres. If the correct amount of pesticide is not used, some nests could receive a sublethal dose of poison. This could lead to the colony separating and sharing less of their resources such as pesticide bait, making them harder to control.

Once you have selected a pesticide, bait these ants by:

It is important to stop the spread of Argentine ants. Nests can be found in a variety of commodities, especially those associated with the ground and which can easily be moved from place to place. You can help to make sure that they are not moved around by checking the following before moving: